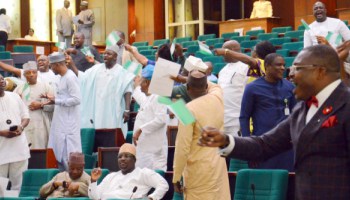 The House of Representatives was Thursday thrown into a rowdy session following a letter written to the lawmakers by President Muhammadu Buhari to address a joint session of the National Assembly on the 2018 Budget proposal.

The President had written to the lawmakers fixing November 7, for the presentation of the proposed 2018 Budget.

The opposition that greeted the presentation of the President’s letter was devoid of party leanings as almost all members of the House shouted it down.

When the uproar which endured for some 60 seconds fizzled out, the Speaker reminded the lawmakers that they had no legal right to stop the President from addressing the joint session of the National Assembly.

This is the first time President Buhari would be presenting the Budget proposal before the National Assembly in the month of November since his assumption of office in 2015.

The month of December has always witnessed the annual presentation before now. The development was to accelerate legislative input to the Budget estimates to ensure its timely passage in the fiscal year.