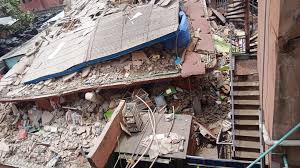 Another Storey Building Collapses In Lagos
A three-storey building has collapsed on Sonuga Street, Palm Avenue, in the Mushin area of Lagos.

This is coming barely two weeks after a seven-storey building collapsed in the Oniru area of the state, killing six persons.

“A building has collapsed on Sonuga Street, at Palm Avenue, in Mushin. Rescue Operation is on going . I will keep you posted,” he said.

Giving an update, the Lagos Territorial Head of the National Emergency Management Agency, Mr Ibrahim Farinloye, said two persons had been rescued from the collapsed building.

“An adult and a child have been rescued alive. Search and rescue ongoing,” he added.