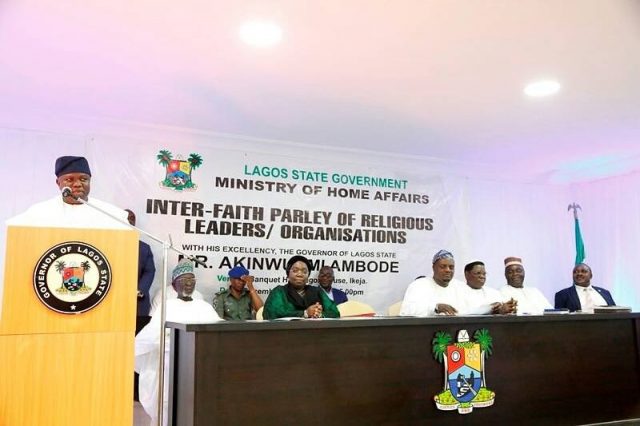 Governor Akinwunmi Ambode of Lagos State has expressed gratitude to the religious leaders and their organisations for their fervent prayers, which have played an immense role in holding back a major religious crisis in the state.

At the inter-faith parley of religious leaders/organisations, which took place at the Lagos House banquet hall, Alausa, on December 12, Ambode requested the Christian and Muslim leaders to continue with such deep and efficacious prayers in the interest of peace and development.

He said that his administration would continue to maintain the current partnership with the diverse religious organisations, in recognition of spiritual team work for the success so far scored by his administration.

While Ambode admitted that Lagos is a difficult state to govern, he said that it was only in an atmosphere of peaceful co-existence and harmony that true and sustainable good governance could be achieved for a more prosperous Lagos state than is presently the case.

For this, Ambode said, nearly 800 Christian and Muslim leaders had been appointed in all the local governments in the state – with the responsibility to preach and press tolerance, understanding, and peaceful co-existence, and, so, strengthen the gains of his administration.