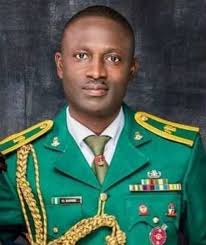 It has been gathered from a reliable source that a Major in the army, Stephen Datong abducted by armed bandits in the premises of the Nigerian Defence Academy is still alive.

A source said that he is not dead yet as being circulated by some media houses.

Recall that on Tuesday, the bandits invaded the Afaka barracks of the academy around 1am, killing two soldiers identified as Lieutenant Commodore Wulah and Flight Lieutenant Okoronwo.

They also abducted Datong and subsequently called the military authorities to demand N200million to free him.

On Tuesday night, there were widespread reports that the lifeless body of the Major was discovered with insinuations that the terrorists had killed him.

However, a family member of the officer told an online media platform,  SaharaReporters on Wednesday that he had not been killed and he was still alive.

“He is still alive. I can confirm it to you,” the source said.