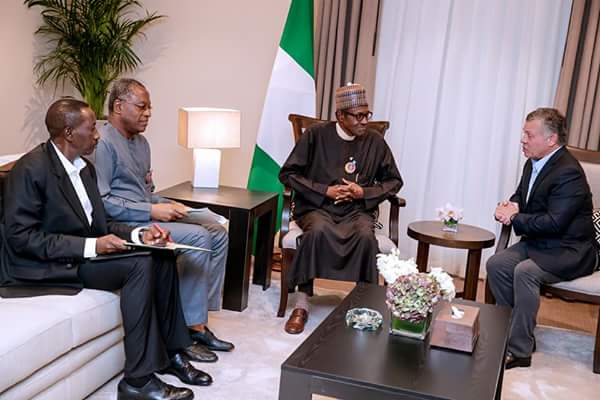 President Muhammadu Buhari has called on leaders to speak up against the violent extremism committed by people in the name of Islam.

The President made the call at the opening of a security meeting hosted by King Abdullah II of Jordan, on Sunday, in Aqaba, Jordan.

Buhari said that the call had become imperative in view of the fact that insurgents were able to attract members into their fold because of the insidious preaching of extremist clerics. He noted that all nations, irrespective of religion, should partner effectively in implementing national, regional and global action plans to counter violent extremism.

Buhari reiterated the commitment of Nigeria to play a leading role in bringing together countries of the West African sub-region in a collective security arrangement.

He also stated that Nigeria was ready to share her experiences with a view to fashioning out comprehensive action plans to tackle the scourge of violent extremism in the region.

He, therefore, called for a stronger collaboration among the member countries of the Aqaba Initiatives to check violent extremism across the world.

The President noted that the joint regional collaboration under the auspices of the Multinational Joint Task Force, combined with the efforts of the Nigerian Armed Forces, had gone a long way to decimate the activities of extremists in the West African region.