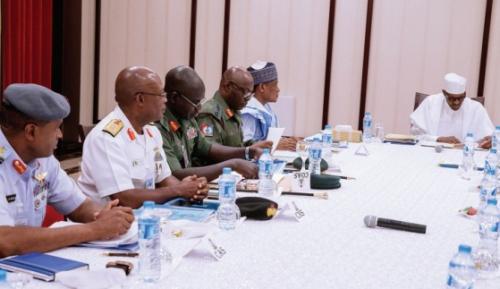 Buhari also inaugurated Harmonised Terms and Condition of Service for Soldiers/Rating/Airmen (Revised) among others.

Speaking to State House correspondents, the Minister of Defence, Mansur Dan-Ali, said the Council was reconvened and inaugurated by the President.

“The Armed Forces Council was convened which had not been done since the inception of this Administration.

“The last Council’s meeting that was done was in 2014. It reviewed terms and conditions of service for officers and soldiers.

“It reviewed some of the retirement benefits for officers and soldiers including Defence Policy which has been obsolete since 2006, we reviewed it and discussed and reached a conclusion on them.

The Minister expressed the hope that the ratification of these documents would enable the Armed Forces cope with the ever changing contemporary security challenges.

He said the documents would help to enhance welfare, command, discipline and administration of the Armed Forces as well as policy framework governing the conduct of security and defence in Nigeria.