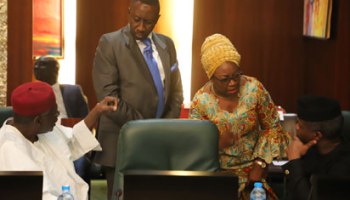 President Muhammadu Buhari has summoned the Chief of Staff to the President, Abba Kyari, and the Head of the Civil Service (HoS), Winifred Eyo-Ita over their clash at the Council Chambers of the Presidential Villa on Wednesday.

The video, which has gone viral showed Kyari and Eyo-Ita in confrontation shortly before the Federal Executive Council (FEC) meeting.

It is believed to have been caused by the leakage of the memo Eyo-Ita sent to the Office of the President on the reinstatement of the former Chairman of the Pension Reforms Commission, Abdulrasheed Maina.

The Advocate learnt that the President was embarrassed when he was briefed about the altercation between Kyari and Eyo-Ita.

He was quoted as saying that even the presence of the Vice President did not deter the two officials from the clash.