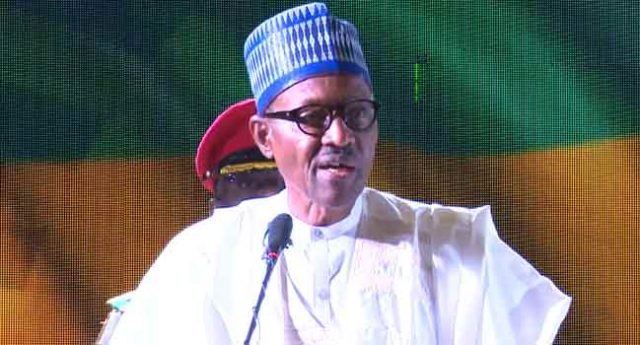 President Muhammadu Buhari has called for an immediate action plan by African leaders and the international community to restore Lake Chad to its lost glory.

The President made the call on Wednesday in his address at the International Conference on saving the Lake Chad in Abuja, the nation’s capital.

Those at the conference include Presidents of Niger and Chad, Mahamadou Isoufou and Idris Deby, among other African leaders, as well as representatives from the United Nations and other concerned Agencies.

President Buhari warned the delegates against any further delay in arresting the situation, in order to mitigate its consequences on the large population in the Basin.

According to him, the negative effects of the shrinking of the lake are enormous while the major challenges facing the region remain unresolved.

The Nigerian leader explained that the conference was convened with a view to finding workable solutions in resuscitating the Lake Chad to the benefit of all member countries in the region, and to the ecological balance of a large area of West Africa.

He was also convinced that it would not just be another ‘talk shop’ but would serve as a platform to re-launch the partnership and commitment of various nations to the growth of the continent.

President Buhari, who noted that the Lake Chad issues must be treated with the required urgency, called on all stakeholders to share the mission of rescuing the Lake Chad Basin.

Read the President’s full speech at the conference below:

Let me begin by welcoming you to Abuja on behalf of the people and Government of Nigeria and to also thank you for honouring the invitation of the organisers to this important conference on the Lake Chad which was jointly planned by the Federal Government of Nigeria, Lake Chad Basin Commission (LCBC), and the United Nations Educational, Scientific and Cultural Organization (UNESCO).

The same welcome to our distinguished guests, speakers and delegates who have come from different parts of the world. Nigeria is indeed honoured to host you at this historic event.

The Lake Chad is very dear to our heart as it is a source of livelihood to over 45 million people living in the Basin. This Lake, which is one of the oldest Lakes in Africa, is shared by Cameroon, the Central African Republic, Chad, Niger and Nigeria. The people living in the Basin depend on the Lake Chad for agriculture, fisheries and livestock for their economic well-being.

The Lake Chad region was formerly an “oasis in the desert”, a hub of economic activities and food security. The farmers, fishermen, herdsmen and traders were happy because business was booming. The happiness and contentment contributed to the stability of the sub-region.

Unfortunately, today that is all history. The “oasis in the desert” is just a desert now, due to the drying up of the Lake Chad. This has resulted in dire consequences for our people as follows:

United Nations (UN) Office for the Coordination of Humanitarian Affairs reports that food security has deteriorated, with more than seven million people in the sub-region facing the threat of famine and half a million children suffering from severe malnutrition;

Fish varieties are long gone leaving the fishermen jobless; farmers and herdsmen struggle over the little water left; herdsmen migrate in search of greener pastures resulting in conflicts; our youths are joining terrorist groups because of lack of jobs and difficult economic conditions. This has resulted in serious instability in the sub-region.

The negative effects of the shrinkage of Lake Chad are indeed enormous.

Let me take a moment to thank my esteemed colleagues – Presidents and Heads of Government of the LCBC for the measures so far taken to tackle the shrinkage of the Lake.

We are also implementing all LCBC programmes aimed at safeguarding the ecosystem of the Basin and the development of our people. Likewise, the Government of Nigeria has initiated several measures to cushion the plight of the people living on Nigeria’s side of the Basin. Notably, among these include:

Unfortunately, the major challenges facing the Lake Chad region still remain unresolved. Our desire as a nation to restore the sub-region to its former glory is very real as evident in my numerous appeals to the international community for support towards the Lake’s revival.

One of such appeals was made during my meeting with the Director-General of UNESCO – Ms Irina Bokova, on August 11, 2016. During that meeting, I requested for a partnership with UNESCO in the organisation of an international conference to reactivate and raise awareness for an international campaign to save the Lake Chad.

UNESCO graciously accepted my request and a communiqué was issued. One of the outcomes of the communiqué is the organisation of this conference, so I must especially thank UNESCO for their support.

This international conference was designed with a view to finding workable solutions in resuscitating the Lake Chad to the benefit of all member countries of the LCBC and to the ecological balance of a large area of West Africa.

In the past two days, there have been technical sessions with delegates, experts, researchers and resource persons exchanging ideas, views, knowledge and sharing information on water resources development and management in a challenged environment.

This is now being followed by this high-level session to consider recommendations in order to garner political and global support for the restoration option identified for recharging of the Lake.

I am convinced that this conference will not just be another ‘talk shop’ but will be a platform to re-launch our partnership and commitment to our continent and the Basin in particular.

Your Excellencies, ladies and gentlemen, the Conference Report will be presented shortly and I urge you to consider it critically with a view to making informed and strong contributions towards its implementation.

Let Abuja be the starting point of this commitment and we will call this “The Abuja Declaration.” Abuja Declaration will be a benchmark and the bedrock upon which future engagements on restoring the Lake would be built.

It will also serve as a fundamental and landmark document which will contain basic principles that can be used as a yardstick for holistic development model for the Basin.

Such a model will be useful especially for policy and decision makers, development partners, donor agencies, investors, researchers and institutions.

I owe a debt of gratitude to my brothers, the Presidents and Heads of State and Government of LCBC Member Countries – Cameroon, the Central African Republic, Chad and Niger for their invaluable contributions to the development of the Basin.

I must also sincerely appreciate the efforts and immense technical support of the United Nations (UN) and its agencies including FAO, UNDP and UNEP and most especially UNESCO for their invaluable contributions towards the Integrated Water Resources Management of the Basin and the organisation of this conference.

The African Union, the European Union, ECOWAS, ECCAS, have also contributed immensely to the sustainable development of the sub-region.

We are also indebted to the governments of Netherlands, Hungary, France, China, Italy, Japan, United States of America, Canada and Britain.

As we continue on this journey towards our goal, I wish to use this medium to solicit for your continued collaboration and support.

Excellencies, distinguished ladies and gentlemen, let me reiterate our firm commitment to restoring the Lake Chad to its former glory. Recognising that our efforts will be more productive with international support, we call on our international partners – technical and financial to remain unwavering in their support.

We must treat the issues of the Lake Chad with the urgency they deserve and show the needed political commitment towards reviving the Lake.

Together, let us share this mission of rescuing the Lake Chad Basin with a renewed vigour, determination and international collaboration as our inaction or delay will continue to accelerate the deteriorating standard of living of millions of our people with dire consequences on our continent and the world at large.

I thank you for what you have done in the past. I thank you in anticipation of what together you and we can do now and in the future.