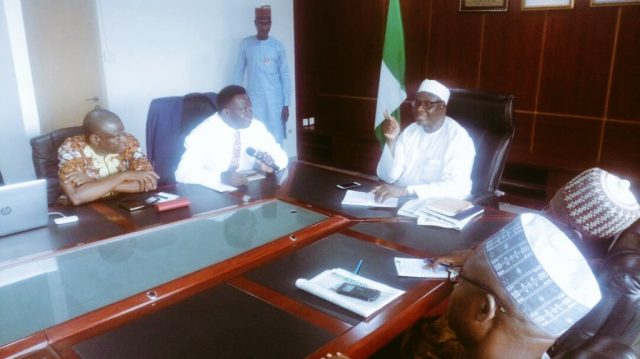 The “Say No Campaign”, a coalition of four Civil Society Organisations (CSOs), has expressed worry over unpaid salaries in some states in spite receiving N2.8 trillion bailout funds from the Federal Government.

A Co-convener of the group, Ezenwa Nwagwu, made this known when the organisation paid a courtesy call on Garba Abari, the Director-General of the National Orientation Agency (NOA) in Abuja.

Nwagwu said that the group was worried about the level of corruption and impunity going on in the country.

According to him, the Federal Government’s fight against corruption should be a collective one.

He therefore urged Nigerians to support President Muhammadu Buhari in his fight against corruption to enable it succeed.

Another convener of the group, Jaye Gaskiya blamed the root of corruption on the lack of accountability and transparency, adding that the government needed to push further its open government initiative.

Gaskiya said that as at 2012, the figure of abandoned projects was put at one trillion naira, and that the amount had increased since then.

He said that state governments across Nigeria were facing challenges of paying staff salaries and pensions, yet bailout funds was provided since 2015 by the Federal Government.

Responding, the Director-General of NOA, Garba Abari said the visit by the CSOs was timely as the agency was rallying support for the campaign against corruption in the country.

Abari said that CSOs had been left to do what the government was supposed to be doing for a long time, adding that the partnership would help tremendously.

He said the Agency had initiated a programme in local government areas that would make the people hold office holders accountable.