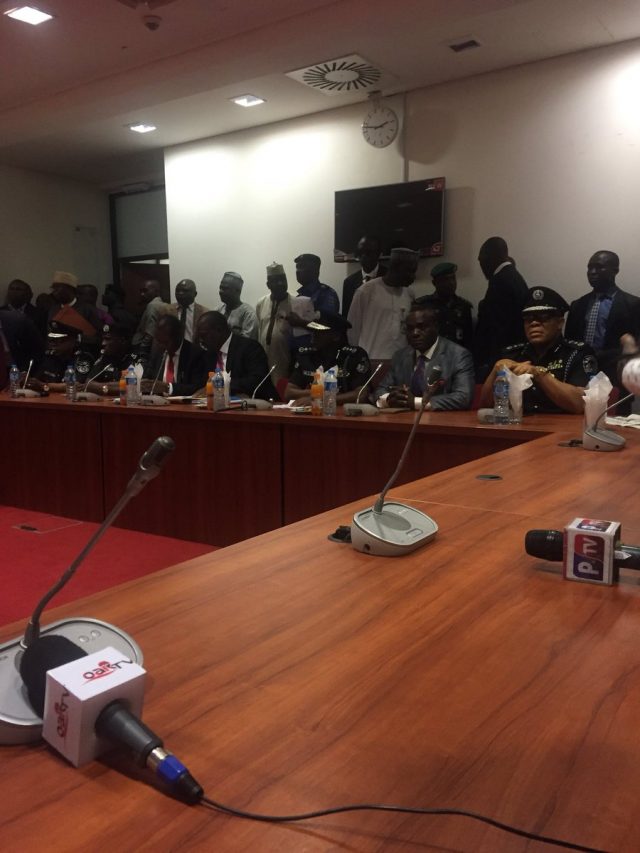 The Senate Ad hoc Committee investigating allegations of corruption and misconduct levelled against the Inspector General of Police (IGP),Ibrahim Idris by Isah Misau (APC-Bauchi) was on Wednesday adjourned to a later date.

The decision was reached after some documents were presented by the IGP to the Committee on the allegations against him.

The Committee resolved to adjourn the meeting to thoroughly study the documents before taking further action.

The Chairman of the committee, Francis Alimikhena, said the senate was not in any way trying to witch-hunt anybody but to carry out its responsibility as provided by the Constitution.

He added that Nigerians were eagerly waiting to know the truth of the allegations “because they are too weighty to be swept under the carpet.”

The IGP said he would not make any comment or ask any question as the matter was already pending before the court.

He said his lawyer, Alex Iziyon would respond to the Committee’s queries.

“I will not make any oral comment or answer any question in respect of the allegations in view of the civil and criminal cases pending in the law court, more so that the Senator has been arraigned in court in respect of these matters.

“I decided to appear before this Committee on the allegations because of the high regard we have for the Senate and respect for the rule of law.

“It is expected that the Senate and the committee will refrain from making references to the issues as it will be against Order 41 (7) and 53(5) of the Senate Standing Order, 2015(as amended).”

Iziyon, on his part said the IGP had nothing to hide, adding that following instructions given to him by the IGP, he had tendered his response to the allegations.

“We responded to each of the allegations to show that we do not have anything to hide.

“I have submitted 15 copies of the response to the Committee,” he said.

Misau had claimed that the IGP purchased two jeeps for the wife of the President, Aisha Buhari.

He also alleged that the IGP misused over N120 billion generated by the Force in one year.

Misau equally alleged that the police boss got a serving police officer pregnant and hurriedly arranged a marriage ceremony in Kaduna.