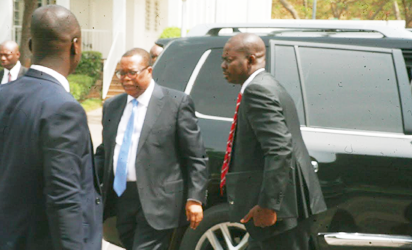 The usual cooperation between men of the Department of State Services (DSS) and their counterparts at the Economic and Financial Crimes Commission (EFCC), may have suffered a temporary setback.

This follows a reported clash in the Asokoro area of Abuja on Tuesday between officials of the two government agencies.

The operatives guiding the two former top security officials were said to have resisted the move, which was followed by a heated argument.

The EFCC had invited Oke for questioning in connection with the $43 million found in an apartment in Ikoyi, Lagos.

Oke’s wife, Folashade who was identified as the owner of the apartment, had also been summoned.

The development was also said to have resulted into palpable tension.

We promise to serve you more on the story as soon as we lay our hands on fresh development.