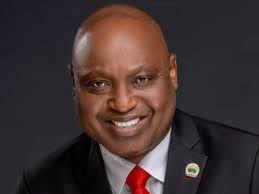 As Ekiti House of Assembly engulfed in crisis,  the Governor of Ekiti State, Biodun Oyebanji, has said he did not interfere in the affairs of the state Assembly.

According to him, he didn’t also have any  preferred candidate for any leadership position of the House because it was not appropriate for him to do so.

This was as he reiterated his commitment to the rule of law and separation of powers in the state.

Oyebanjo said this on Tuesday when the new Speaker of the House, Olubunmi Adelugba, who replaced Gboyega Aribisogan was officially presented to him at his office by the chairman of the All Progressives Congress in the state, Paul Omotoso.

According to a statement issued by the state government, Oyebanji appreciated the APC leadership in the state for resolving the family disagreement among the state legislators and commended the House for demonstrating the confidence their constituents and the leadership of the party reposed in them.

The governor used the opportunity to appeal to the new Speaker for a speedy passage of the budget that was with the House.

He said, “My comment begins with an appreciation to the party leadership for resolving this family disagreement, it’s not a crisis; democracy comes with strains and stresses. There are contestations and disagreements but the beauty of democracy is that there are in-built mechanisms to resolve it.

“And that is what has played out. The APC is one. I’m a loyal member of this party; the APC gave me the platform to stand on, without the APC, I will not be here today.

” What I have done as your governor is to ensure that I protect lives and property and that is within my power as the governor of this state. I have not interfered but I’m happy with the outcome. As progressives, we have a culture and the culture is respect for leadership.

“And madam Speaker, our budget is before the House of Assembly and we are working so hard to ensure that we deliver on our promises to Ekiti people but we cannot violate extant rules and regulations. I am appealing for a speedy passage of the budget.

”There are lots of things we ought to have brought before the honourable House but we are waiting for the passage of the budget.

“While congratulating the new Speaker, I will just plead with the party chair to bring in everybody and for the first time, I will have to quickly respond to all the insinuations on the social media on what has happened in the House of Assembly. It’s a family affair and as a family we would resolve it.”

Earlier speaking, Adelugba dismissed talks of rancour in the House while expressing appreciation to the APC chairman in the state for the role he played in ensuring that the party’s decisions were adhered to.

“All along, everyone refers to Ekiti State House of Assembly as the most peaceful, dutiful, with particular mention of the number of bills that we have passed as we don’t joke with our legislative activities,” she added.