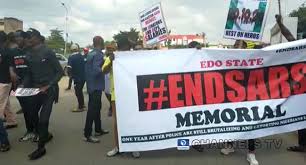 The Nigeria Union of Journalists (NUJ) has condemned the arrest of Sikiru Obarayese during Wednesday’s EndSARS memorial in Osun State.

It was learnt that a Daily Post Journalist.Obarayese, was hounded by six policemen.

According to the report, around 1pm, officers deployed against gatherings to commemorate the anniversary ambushed protesters at Old-Garage in Osogbo, the State capital.

It was gathered that Obarayese and other civilians were beaten and arrested. The journalist was beaten  despite identifying himself.

The Chief Superintendent Oyegbade Akinloye, Divisional Police Officer (DPO) of Dugbe Division, have instruction to operatives to take Obarayese to the station from Freedom Park.

There, one L. Yakubu punched him severally, while one Inspector Charles wrote a statement for him to sign.

He refused and was charged to Osogbo Magistrate Court on trumped-up charges after some officers threatened to kill him.

He was slammed with two counts of breach of peace and recording/assaulting DPO Akinloye.

Magistrate A. O. Daramola condemned the use of force and asked the prosecutor, Inspector Adeoye Kayode, to tell her when recording security operatives became a crime

The magistrate  granted the request of the Commissioner of Police, Wale Olokode, for withdrawal of the suit and struck out the case.

They said the arrest and arraignment of Obarayese was gross violation of his fundamental human rights.

The NUJ blasted Akinloye for ordering the arrest of the journalist and speedily arraigning him.

“The police should be civil in approach and stop unnecessary force on citizens performing legitimate duties.

“They should focus on criminal elements. The union will no longer tolerate abuse and harassment of its members.

“The Commissioner of Police must call his officers to order and educate them on the place of media in the task of policing the state.

“If this command fails to do so, the union may not have any other option than to stop reportage of all police activities”, NUJ threatened.