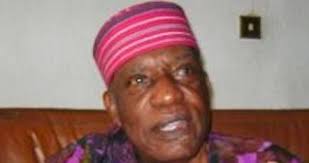 The news of his death was made public  through Chief Eric Teniola who is close to some members of his family. He was 83 years old.

Up till this moment, the exact cause of his death is not known as he was said to be hale and hearty a few days ago.

Duro Onabule, who was a veteran journalist, was editor of National Concord from 1984 to 1985 and later became Chief Press Secretary to Babangida.

Onabule was working with the defunct Concord newspaper owned by late chief MKO Abiola before he was appointed as Babangida’s image builder.