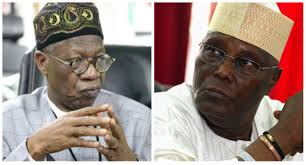 The camp of the presidential candidate of the People Democratic Party Atiku Abubakar has attacked the Federal Government for lying despite inflicting sufferings  on the citizens of the country since 2015.

While berating the  Minister of Information and Culture, Alhaji Lai Mohammed, of lying that the presidential candidate of PDP, Alhaji Atiku Abubakar, copied the blueprint of the administration of President Muhammed Buhari as his policy document, the group described the allegation as totally false and unfounded.

According to Atiku camp, the Minister should tender a public apology for lying to Nigerians on the document, adding that Buhari’s government had no agenda from inception in 2015 .

It will be recalled that the Minister  had attacked Atiku over his economic blueprint, accusing him of copying his programmes at the same time.

He said: “Last week, the presidential candidate of the main opposition Peoples Democratic Party (PDP), former Vice President Atiku Abubakar, spoke on his Economic Blueprint at an event in Lagos.

“Let me say, straightaway, that the so-called blueprint is a crude attempt at copying all that the Administration of President Muhammadu Buhari has done, especially in the areas of job creation, infrastructure financing, relationship with the private sector, rejuvenation of the power sector, poverty reduction, debt management and the overall management of the economy.”