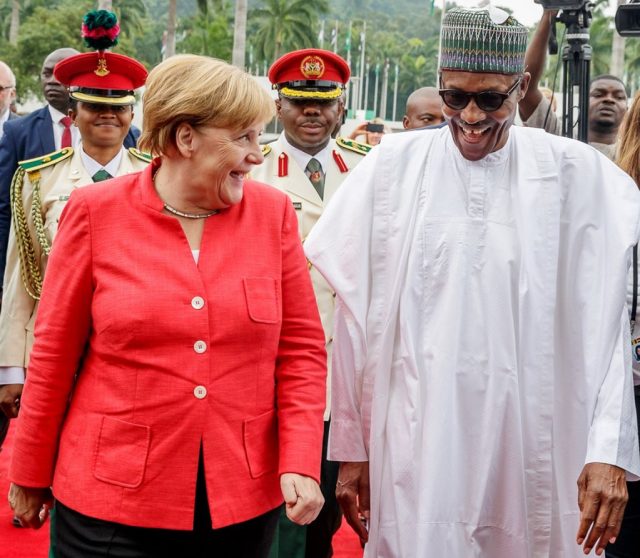 President Muhammadu Buhari on Friday said that the Federal Government would continue to discourage Nigerians from embarking on illegal migration to Europe, saying those stuck in foreign countries will continue be repatriated back home.

The President stated this at a joint news conference with the visiting German Chancellor, Angela Merkel, after a closed-door meeting between the two leaders at the Presidential Villa, Abuja.

He revealed that the Federal Government had so far repatriated more than 3,000 illegal migrants, who were stranded in Libya on their way to Europe.

“I’m against those (my) countrymen and women that illegally find their ways to other countries other than Nigeria.

“But I believe you know that the ECOWAS Protocol includes free movement of persons and goods and services.

“But for those going to Europe we are not as an administration in agreement with those Nigerians who try to defy the Sahara desert and the Mediterranean because they feel there are greener pasture there, whether they are pre-paid, free or not.

“It will be recalled that we repatriated about 3,000 Nigerians that were stuck in Libya on their way to Europe.

“You also must have read in the newspapers or seen in the television stations the number of Nigerians lost in the Mediterranean,’’ he said.

President Buhari further warned that the government would continue to repatriate those who refused to listen to its advice, adding that illegal migrants were putting their lives in danger.

In her remarks, the German Chancellor, Angela Merkel, who spoke through an interpreter, explained the details of agricultural cooperation and other assistance to Nigeria.

She pledged that Germany would provide educational assistance that would increase the number of Nigerian students studying in her country.