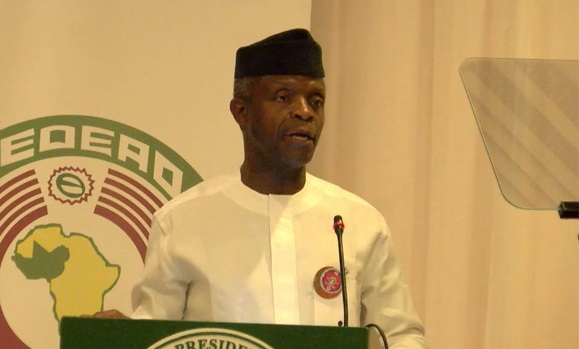 The Vice President,  Yemi Osinbajo has urged ECOWAS member states to treat the challenge of money laundering and illicit financial flows with zero tolerance as it has become a threat capable of wiping out countries if it is not urgently dealt with.

Osinbajo, who stated this at the 18th Ministerial Committee meeting of the Inter-governmental Action Group Against Money Laundering in West Africa (GIABA), said the commitment to fight transnational organised crime, money laundering, and terrorist financing must be backed with action and visible results.

“We are dealing with an existential threat. It’s either we wipe it out or it wipes us out. This should spur us to treat money laundering and all other financial crimes with zero tolerance.

“We have for long affirm our commitment as a sub-region to fighting money laundering and terrorist financing. We must now back this intent with forceful action and visible results,’’ he said.

The event which had in attendance Ministers from the 17 member states of GIABA and Diplomatic Corp involve discussion on how to effectively fight the scourge of transnational crime, corruption, money laundering and terrorist financing.

In his description of the dangers that lie ahead for member countries if financial corruption is not checked, Osinbajo also called for more global support in the repatriation of funds.

“It is unconscionable in our views to have stolen funds in a bank within the jurisdiction of a FATF (Financial Action Task Force) country and to have to go through a rigorous obstacle to retrieve the funds. And even when such funds are to be returned after several years, humiliating conditions are attached.

“We cannot have anonymous ownership of countries trusts and all other arrangements designed to cover the ownership of assets and at the same time expect optimal results from mounting money laundering measures.”

The Director-General of Giaba, Adama Coulibaly, also at the event said the Committee of the 17 members of GIABA is meeting for the second time in 2017 for the sole purpose of finding a solution to terrorism and fighting financial crimes.