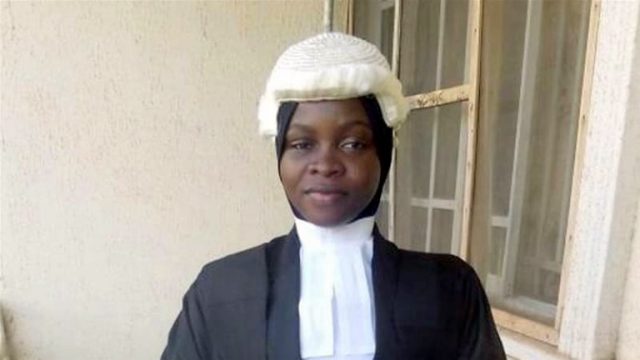 Every institution has rules and regulations. The Nigerian judiciary can still boast of having it rules intact.

Being known as a religious country, some Nigerians want to be recognized anywhere with the religion. Thus was the case of a law graduate, Firdaus Amasa, who was refused entrance to the venue of the graduation ceremony for her fellow colleagues in law for wearing her hijab under her wig.

It was gathered that she was told that she won’t be allowed to go in with her hijab under her wig. It was also gathered that three professors of law came to tell her to do the same, but she refused.

Now come the question, does removing her hijab for just some minutes to get an handshake make her go to hell?

For instance, the Jordanian society hosted the female world cup last year. As a Muslim society, the country didn’t say FIFA has to bend the rules for their girls to wear hijab and play the game.

It was even reported that a Catholic sister, who also graduated, had to remove her scarf in order to give what ‘belong to Caesar to Caesar’ and she got her handshake.

Meanwhile, Amasa should not be blamed as some of our leaders have also run foul of the laws of some institutions due to religious beliefs.

Since we have been this so-called religious society, how has it translated into development from a Third world country that we have been since independent?

Amoda will stand her ground by not removing her hijab since Governor Rauf Aregbesola could insists that Muslim girls attending public schools should wear hijab.

And we all know what followed this instruction as other denominations came to school in their religious apparel.

Am sure Amasa will not be able to sit beside a fellow graduate who is a son of an herbalist that would have wore his outfit decorated with cowries and holding a horn to show his religion. Same could have been done by a Celestial, who would have walked barefooted on his Sutana and a Cherubim and Seraphim member.

My message to Amada is that every institution have its rules and regulations that must be obeyed. So, I see no reason why those rules should be circumvent all in the name of religion.