In a statement released by his spokesperson, Tony Eluemunor, the former governor said Nigerians betrayed Ekwueme’s effort to rescue the nation from “political and economic morass will.”

“Even those who betrayed the very effort to make Ekwueme President may begin to, hypocritically, of course, bewail the fact that Ekwueme or the Igboman or woman, never ruled Nigeria.

“In politics, he was both gentlemanly and fatherly, introducing mildness even when the others had embraced roughness and irascibility.

“If only we had allowed Ekwueme to rule Nigeria, what example would he have set? Now, we will never know…and Nigeria is the ultimate loser.

“Ekwueme has lived a full life; he has given a radiant account of himself and we all agree he was outstanding,” he said. 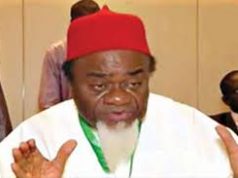