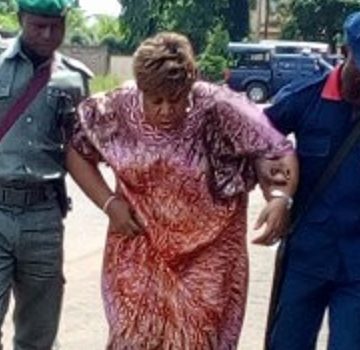 The National leadership of All Progressives Grand Alliance (APGA) has expressed support for the Anambra chapter of the party over the suspension of three lawmakers in the state legislature.

Victor Oye, the National Chairman of APGA, said in Awka on Friday that the state chapter acted in line with the party’s constitution.

Norbert Obi, the Chairman of the party in Anambra, on Thursday announced the suspension of three lawmakers including Mr Ikem Uzoezie, the new factional speaker of the Assembly.

Others were Harford Oseke, the Deputy Speaker and Mr Victor Okoye, the Majority Leader of the House.

The chairman said their suspension followed their leading role in the impeachment of Hon. Rita Mmaduagwu as Speaker of Anambra State House of Assembly, without carrying the party along.

Oye described the purported impeachment as unfortunate, adding that they should have sought the approval of the party that gave them platform to become members of the House.

“What happened in the Anambra State House of Assembly (ANSHA) few days ago was unfortunate, the members did not consult the leadership of the party, they did not emerge members of the House from the moon.

“They were sponsored by the party, it was the party that won the election and they are now representing the party which is supreme and whatever they do the party must be carried along.

“None of them stood for election; the party did and nominated them to represent the interest of the party in the House, so they should not behave as if nobody controls them.

“Nobody discussed the removal of the speaker; they took that monumental decision when they know that they cannot muster the required number to do so.

“No consultation with the leadership of the party, governor of the state, there are rules that should govern what they do, there should be synergy; you don’t just act anyhow,” he said.

Oye said the three were suspended in the first instance, adding that the outcome of investigation would determine if other members would be visited with disciplinary actions

He said “whatever the State Working Committee of our party is doing enjoys our solid backing, they have the prerogative to suspend people who breach the constitution at that level.

“They acted in accordance with our constitution because the suspended members acted in such a way that showed that they were being teleguided by fifth columnists.”

The national chairman said there was no impeachment as the rules for removing a speaker were not followed.

“There was no impeachment in Anambra State House of Assembly because the rules were not followed; they were not able to muster the required number, the mace was not in place while the sitting was going on.

“You don’t remove a speaker with voice votes, there must be proper counting and you must serve the speaker with all her sins or infractions and the new speaker must be sworn in.