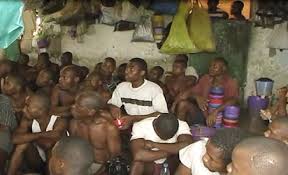 With a population of  7,396 out of the total of 68,686 in all states of the federation, Lagos has the highest number of prisoners.

According to data released by the National Bureau of Statistics (NBS), Bayelsa, which has 444, is the least populated, next to Ekiti with 585.

The statistics showed that the total prison population grew by 5.6%.  Majority of inmates in prisons are awaiting trial.

The most represented age category is the 26-50 years age group followed by the category of those above 51 years.

“Conversely. Ekiti and Bayelsa states had the least prison inmates population of 444 and 585 as against prison capacity of 200 and 400 respectively.”

In 2016, 67,329 of the prison inmates were males as against 1,357 females, signalling a reduction in the number of female inmates in the prisons.

Earlier in the month when he met with judges, President Muhammadu Buhari lamented over the congestion of prisons.

“We need a new approach to prisons decongestion. It is a national scandal that many prisons are overcrowded by up to 90 percent. Urgent new measures should be put in place to speedily decongest prisons not only in the interest of justice but to save cost for prisons maintenance and enhance the welfare of prisoners,” he had said.