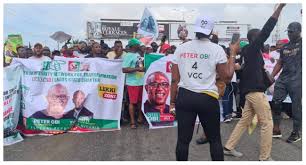 The Lagos State coordinator for the rally organised by the supporters of Labour Party Presidential Candidate, Peter Obi has been reportedly arrested by the Department of State Services.

According to Saharareporters, the  coordinator who is identified as Joseph Onuorah was arrested when he arrived in Lagos on his way from France during the early hours of Saturday.

“DSS have arrested Joseph Onuorah (the Lagos coordinator for Obi rally) upon his arrival in Lagos. He is said to be returning from France for the Obi Rally In Lagos,” a witness said.
https://www.facebook.com/100044575087847/posts/pfbid02GNccEUxAxmKi2jQNyw8ceUUSTydBNirKKtWAxbXjZqZMDXDTEdFbUHG4hbj16Fbdl/?app=fbl

Rallies to demonstrate support for the Labour Party presidential candidate Peter Obi were held in major cities around the country on Saturday.

It was gathered that In Lagos, the supporters started the walk from the Admiralty Junction moving through the major road in Lekki.

They stopped at every junction, carrying flags, banners, and other paraphernalia as they marched towards the Jakande, Elegushi axis, ostensibly to avoid clashes with the police already stationed at the Lekki Toll Gate.

Recall that a Lagos court on Wednesday ruled against the convergence of the rally on Lekki Toll Gate.

The court also directed the Inspector-General of Police, Usman Baba, and the Lagos State Commissioner of Police, Abiodun Alabi, to ensure compliance with the order.

The rally, according to the conveners, is to garner organic support for the LP presidential candidate ahead of next February’s general elections.

Obi, a 61-year-old former governor of Anambra State, is running alongside Datti Baba-Ahmed.