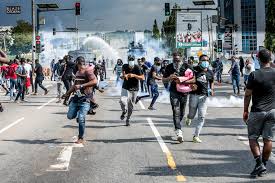 Some End SARS protesters, who were  apprehended on Wednesday at the Lekki toll gate, have been released.

The intimation was made by Legal , Modupe (Moe) Adele, who is one of the promoters of the End SARS movement,

It will be recalled that many people were arrested by the Nigeria police on Wednesday during a peaceful protest for the EndSARS memorial.

She said about thirty-three protesters were found at the state CID.

Her tweet read: “We went looking for four people at the State CID and found 33 people. Every single time lawyers go to a police station, they find so many others. This happened during #EndSars and it happened again today.

“Nigeria police are so efficient, they arrested people, drafted charge sheets, set up Mobile Court, arraigned people at 9pm. Eh hen. So, they have this level of efficiency? Or it only comes out when people are being harassed for speaking up against injustice

“We will leave our emergency numbers open until tomorrow midday when we will shut them down. Everyone reported to us today as arrested has been released. If there’s anyone who went out for #EndSARSMemorial and is not back home by day break, please call/text the numbers in the tweet below.”