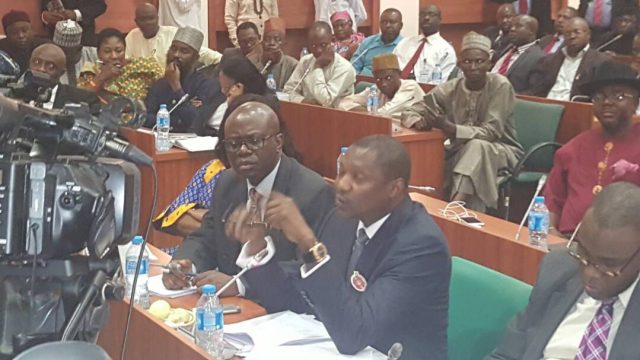 Lagos-based lawyer, Femi Falana has said that the Minister of Justice and Attorney General of the Federation (AGF), Abubakar Malami, has failed in his desperate bid to justify the recall of ex-Pension boss, Abdulrahseed Maina.

Falana, in a reaction to the allegation made by Malami, that a Lagos-based lawyer bought a property recovered from the defunct Presidential Task Force on Pension Reform boss, mocked Malami over his inability to produce any evidence that Maina handed over any single property to the Economic and Financial Crimes Commission (EFCC).

Speaking with Punch, Falana said: “Malami claimed that the same property worth N1bn was recovered from the Presidential Task Force on Pension Reform headed by Maina and handed over to the EFCC, which sold it to a Lagos-based lawyer.

“Even though he did not mention my name , I knew that Malami was out to scandalise me. I thought that the Attorney General would have been more creative in his desperate bid to justify his defence of the fugitive from the law.

“But Malami has not been able to justify the monstrous allegation. Can you believe that Malami took an oath of office and swore by the Holy Quran to do what is right to all manner of people according to law, without fear or favour, affection or ill- will. Has the fellow done that which is right to me without ill-will?


“However , I pity Malami for exposing himself to such gargantuan ridicule in his rabid bid to destroy me. I watched his appearance at the public hearing conducted by the House of Representatives and I pitied him.

“I could not believe that the Chief Law Officer of the country could travel all the way to Dubai to meet a fugitive from the law. When challenged by the House Committee to justify the legal advice that he gave to the Federal Government for the recall and reinstatement of the fugitive, he turned round to deny one of the three letters written to the Federal Civil Service Commission on the matter.”