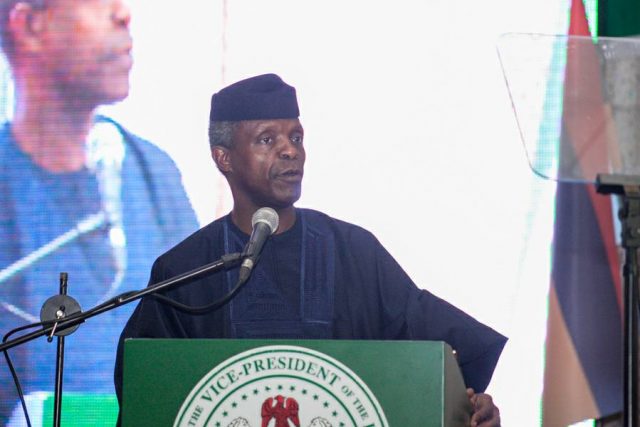 The Vice President, Yemi Osinbajo has been speaking on the achievements of the Muhammadu Buhari Administration.

Osinbajo who spoke at the 2017 graduation of the Nigerian Institute of Policy and Strategic Studies, in Kuru, Jos, on Saturday, said the Administration was able to do this despite scarce financial resources, made more difficult by the squander of the Jonathan era.

He noted among other things, that despite the fall of revenue by 60 per cent, the Buhari administration  started a series of bailouts for the States, to enable them pay salaries and pensions. The government was also able to provide about N1.3trillion for capital expenditure, the largest amount for capital in our nation’s history.

“For the first time in five years we saved $500million, and invested another $500million in the Sovereign Wealth Fund. Today our external reserves stands at $35billion the highest in the past four years,” he said.

Without necessarily mentioning names, Osinbajo dealt a crushing blow to government critics and politicians who have never given the Administration any credit.

“We must pay attention to what we are seeing today, and some of the shameless noises of those who brought our nation to its knees, many of whom still have looted funds in their possession, trying to rewrite history and hoodwink the populace again. We say never again.”