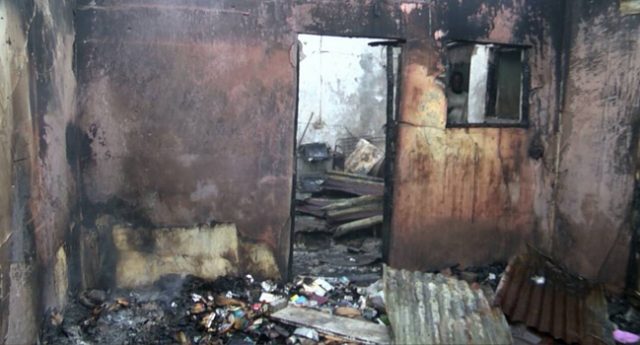 The incident which is occuring for the third time in one year in the state, happened at about 7 .30 pm on Sunday.

Two persons at No . 17, Umo Orok Lane, in the Calabar-South axis of the metropolis were also injured.

On April 20 , 2017 , at least eight persons died at a football viewing centre in Nyaghassang community in Calabar Municipality when a high tension cable fell on the roof of the centre.

Again, on October 24 , another high tension cable fell on the roof of a residential building along Adak Uko Street in Calabar-South and burnt down a house, while two persons were electrocuted .

It was learnt that the latest disaster was as a result of high voltage.

An eyewitness, Uche Kalu, said the effect of the high voltage also spread from number 17 to 22 of the same lane, affecting no fewer than six houses and in the process, killed a middle-aged businessman simply identified as Joseph .

It was learnt that one of the tenants of an affected building lost N580,000 to the inferno.

Kalu said his wife raised the alarm at about 6. 30 pm when she observed sparks from the high tension cable .

“The light went off, but at about 7 .30 pm, the electricity was restored .

“The spark continued, but the voltage was too high and before we knew it, the small transformer near my wife ’s shop blew up and electric cables fell and currents started flowing through everything that had life in that vicinity .

“The fire started burning the houses one after the other. I understand that Joseph had tried to disconnect the appliances in his house when he was electrocuted . He died immediately.

“ I understand that he (Joseph ) had planned to get married in January ,” he said .

A survivor and mother of three , Patience, said the high tension cable almost fell on her.

“I am in great pain, but I am glad that I survived it. I learnt that Joseph died, it is so sad, ” she said.

Another victim, Effiom Cobham, whose house also got burnt, said the sum of N580,000 in his custody got burnt

“Look at my house, look at my life, where do I start from here?

“I have lost everything. Even the money I was given to pay workers ’ salary was also burnt,” he lamented.