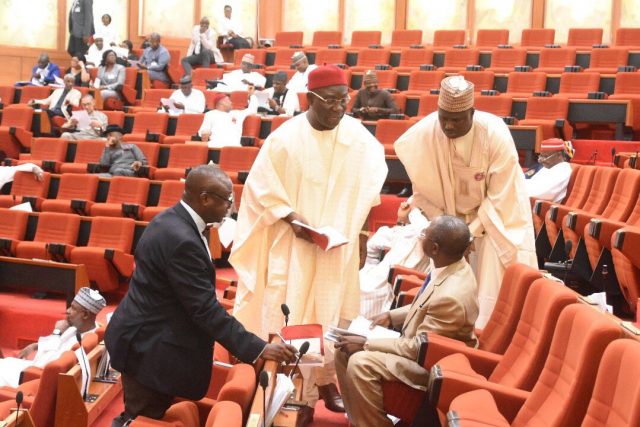 The Senate has announced that it would probe alleged feud among Economic and Financial Crimes Commission(EFCC), Directorate of State Security (DSS) and National Intelligence Agency (NIA) over operational issues.

The face-off was said to have stemmed from EFCC’s attempted arrest of former Directors-General of DSS, Ita Ekpeyong and NIA, Ayodele Oke.

The Senate said it would set up an ad hoc Committee to investigate the matter within two weeks.

The Advocate had reported that the operatives of the DSS and NIA stopped the EFCC team from arresting the duo.

The resolution followed a motion by Dino Melaye (APC-Kogi), drawing attention of the upper chamber to alleged resistance by DSS and NIA officers on Tuesday of the attempt to arrest Ekpeyong and Oke.

Presenting the motion, Melaye said that it was expedient for the Senate to wade into the matter in view of its threat to national security.

“The development created gridlock in the area as people living  there were either not allowed to gain entrance to their residents or to move out.

“We will recall that the same DG, DSS, had written this Senate before now on the Acting Chairman of EFCC, Ibrahim Magu.

“We are not here to lay blame on anyone but to say Nigeria has been embarrassed before the international community for two sister agencies to be involved in fisticuffs,’’ he said.

Contributing, Deputy Minority Whip of the Senate, Biodun Olujimi, said it was a dangerous situation that should be nipped in the bud.

According to her, it is shameful for security agencies to be involved in such a fight.

“The truth is that you cannot go to the house of a security agent, a man who has kept the secret of this country and arrest him like a chicken.

“Remember we rejected Magu but he is still there. The Senate is being defied; the Presidency has to be called to order. Somebody has to be in charge,” she said.

Lawan called for calm, assuring that the matter would be investigated.

In his remarks, President of the Senate, Bukola Saraki, urged the lawmakers to remain calm while the ad hoc committee probed the development.

He said “anything we say now will be based on assumptions and not facts.

“The most important thing now is the prayer and it will guide us on the way forward.”