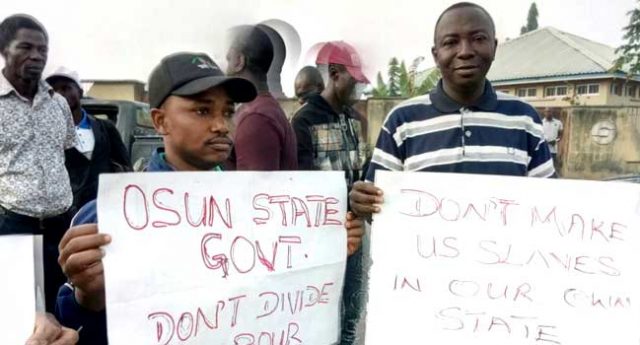 Civil Servants in Osun have been barred from gaining entry into the Abere secretariat by the leadership of the Nigeria Labour Congress (NLC) in order to begin the planned strike.

It was learnt that the NLC on Wednesday morning at about 7 am took over the entrance gate of the secretariat to ensure total compliance to its directive of embarking on an indefinite strike over the modulated workers salary being received for over two years now.

Theadvocate.ng reports that the Leadership of the state NLC had last week directed their members not to return to work this week as they will no longer take half salary from the state government.

However, the Chairman of the NLC, Jacob Adekomi, said the directive by the Head of Service, Festus Olowogboyega, that workers on Grade Level 1-7 resume work got the unions infuriated hence the resolve to ensure they turn any erring worker back home.

The Labour union is demanding confirmation of appointments of some workers since 2012, promotion for others and stoppage of modulated salary being paid to workers and pensioners since July 2015.