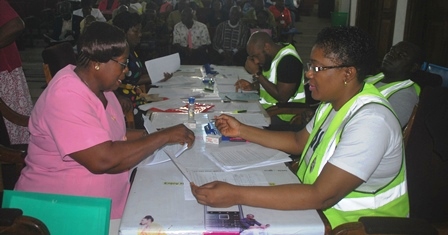 The House of Representatives on Tuesday called on the Federal Government to ensure payment of 33 percent pension savings to pensioners in the country.

Hassan Shekarau, Chairman, House Committee on Pensions, made the call during an oversight function on the ongoing pension verification exercise in Port Harcourt.

The exercise, organised by the National Pension Commission (PenCom), covers pre-retirement verification and enrolment for Federal Government workers retiring from service in 2019.

Shekarau said the committee was working tirelessly to ensure that the Federal Government offset the pension arrears owed to retirees since 2010.

“As a committee, we have been battling and pressurising the Federal Executive Council to release the 33 percent arrears to senior citizens to enable them to enjoy their retirement .

“We are doing this especially for those who are under the Contributory Pension Scheme and those under the Defined Benefit Scheme.

“One thing is for funds to be provided in the budget and another thing is for the executive to release the money. This is why we are having the challenge.

“But if PenCom gets number of retirees and size of money needed – then put it into their budgetary provision – then we will approve at the National Assembly,” he assured.

Shekarau said the house committee had met with the Federal Ministry of Finance; the Budget Office, PenCom and the Pension Transitional Arrangement Directorate to resolve the issue.

He said the committee’s pressure on the Federal Government had yielded result as President Muhammadu Buhari had directed the release of five percent Redemption Funds to pensioners.

“President Buhari directed that N54 billion should be released to settle the backlog for pensioners who retired in 2015, 2016 and even 2017.

“I have had a brief from PenCom that they have paid those who retired in 2017 up to March and May.

“It is worthy to note that the pension reform and the new contributory pension scheme is a better option compared to the old pension scheme,” he said.

The Head of Corporate Communication Department of PenCom, Peter Aghahowa, said the verification exercise targeted 500 to 700 federal workers in Rivers and Bayelsa.

He said the exercise, which started on June 25 would end on August 17 nationwide, and covered federal workers who would retire from the service between Jan. 1 and Dec. 31, 2019.

“All information captured would be used to compute the retiree’s fund. All investments are monitored and we will make sure all the pension managers operate within PenCom’s guidelines.

“We will all retire someday and so, it is important to us to make the scheme safe for workers to enjoy their savings after retirement,” he said.