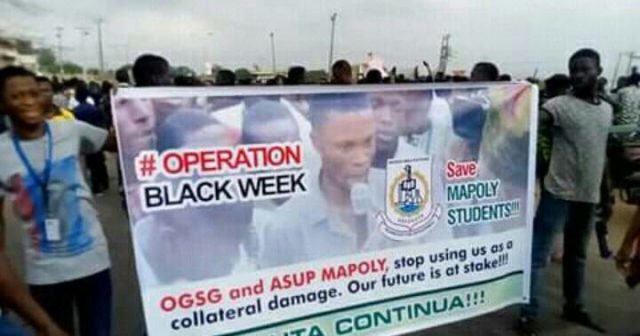 A female student of Moshood Abiola Polytechnic (MAPOLY), Abeokuta, Ogun State, fainted while a policeman got injured on Monday as scores of students of the school took to the streets to protest their inability to sit for their second semester examination since September 18.

The Higher National Diploma students in their final semester, lamented that they ought to have joined others who have already been mobilised for the one-year National Youth Service Corps, but they had yet to sit for their second semester examination.

The students, however, met a detachment of policemen around NNPC junction, which led to a confrontation, as they were said to have obstructed the vehicle of the policemen.

The policemen allegedly fired teargas canisters at the students to disperse them, and a female student, said to be asthmatic, collapsed.

She was said to have been rushed to the state General Hospital, Ijaiye, for medical attention.

The students later marched to the governor’s office at Oke Mosan, demanding to see him. But the governor was not available.