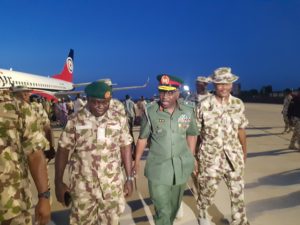 Maj.-Gen. Bulama Biu, the General Officer Commanding (GOC), 7 Division, Nigerian Army, has called on remnants of the Boko Haram insurgents to surrender themselves to security operatives so as to avoid imminent calamity.

Biu, who spoke with newsmen in Maiduguri, warned that the military’s final onslaught against the insurgents would be sustained until they were completely neutralised.

Biu was recently granted accelerated promotion by President Muhammadu Buhari for the extraordinary feats, exemplary leadership, commitment and valour recorded under his command in the counter-insurgency operation in the North East Zone.

The GOC said collective efforts put in place by officers and men of the Division translated to his elevation to the rank of Major General in the army.

He urged his troops to continue to display professional commitment toward restoring peace and sanity in the North East Zone.

“This oppotunity given to me by way of elvating me to this rank will certainly make me to redouble my efforts toward ensuring that we achieve our desired goals.

“I want to thank President Muhammadu Buhari, the Commander-in-Chief for finding me worthy.

” I equally want to thank the Chief of Army Staff, Lt.-Gen. Tukur Burutai, who put in all his time and support to ensure that we key into his vision and policies. I owe him a lot of gratitude.

“Today I am being celebrated not only by officers and men of the Division and the Nigerian army, but I believe entire Nigerians.

” The promotion I was told was as a result of all the efforts and successes we recorded in defeating Boko Haram.

“Our appreciatrion will therefore be incomplete without calling on the remnants Boko Haram to join in celebrating me by laying down their arms unconditionally as quickly as possible for peace to reign.

” Then, I will have a great sense of fullfilment.

“But where some of them decide not to do so, I want to assure them that I have returned to Maiduguri more reinvogorated, well energised; I have my eyes very wide and ever prepared to go after those that are adamant,” he said.

Biu also urged well meaning Nigerians to continue to support the armed forces’ peace building initiatives in order to achieve lasting solution to the insecurity in the country.