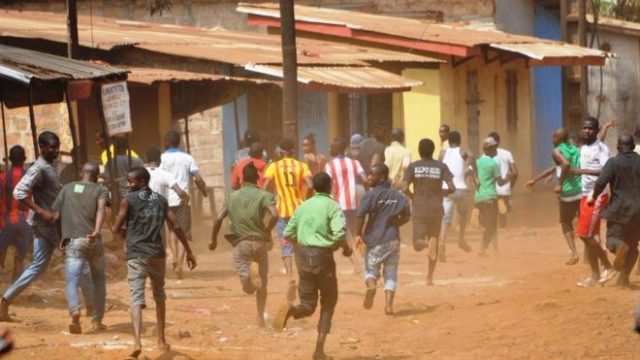 At least two people have been killed and many others injured following a communal clash in Mararraban Ba’isa, Donga Local Government Area of Taraba State.

The Police Spokesperson, who confirmed the violence, said no casualty was recorded. This is however contrary to the statements of two residents.

The violence was between the Buban and Beyen ethnic groups and was over the reconstruction of a court building.

Locals say the crisis erupted Thursday morning after some youth from the two warring tribes took to the streets, destroying property and smashing vehicles.

“The Buban youth took to the streets, destroying property attacking people; threatening that no one will re-build the court which they claim is in their territory,” a local resident who is of the Beyen ethnic group said.

“They were attacking us, and this forced us to defend ourselves and retaliate. This court must be built, because it’s a government property.

“It’s a Constituency project initiated by the Senator representing Taraba Southern Zone, Emmanuel Bwacha. So why are they stopping it?” the resident said.

Another resident who is not of the two ethnic groups narrated what he said was the cause of the violence, saying: “’the crisis started over re-building of a local court that was close to a mosque. The court was abandoned since. Bwacha, initiated the re-building in his Constituency projects.

“As the work was about to commence, Buban tribal group protested against re-building near mosque, while on the other side, Beyen group which are Bwachas kinsmen also protested threatening not to stop; and crisis ensued.

“For now two people killed, one was instantly and the other in the hospital. There are still some with injuries.”

The resident said that “soldiers from Takum were earlier deployed to intervene. Shortly after their departure, fresh violence erupted in the evening.”

The Police Spokesperson, David Misal, confirmed the violence but said no one was killed.

“As I am talking to you, security measures have been taken following this crisis that ensued between the two groups. No, injury or death was recorded in the violence,” he said.