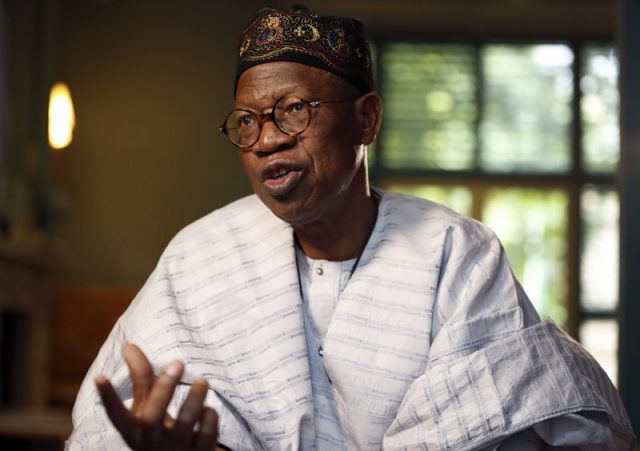 The Federal Government has described the criticisms trailing the approval of one billion dollars for the fight against insurgency and other violent crimes in the country as unnecessary and unhelpful.

The Minister of Information, Culture and and Tourism, Lai Mohammed, expressed this position at a news conference in Lagos.

He said the Nigerian Governor’s Forum acted wisely in approving the fund from the Excess Crude Account based on the need to properly fund security operations in the country to adequately respond to threats by Boko Haram and other criminals.

Mohammed pointed out that the approved fund was not to fight Boko Haram in the North East alone but also to tackle kidnapping,cattle rustling, illegal oil bunkering and other crimes.

He expressed dismay that an action intended to make the country safer, had been subjected to attacks by people with ulterior motives.

The Minister said that it was wrong to sacrifice the issue of security on the altar of politics, saying opponents of the fund were taking politics too far.

Mohammed said asymmetrical wars were very expensive to fight, adding that even though Boko Haram had been degraded, there was the need to properly fund Military operations to enable it confront insurgents’ threats.

“There has been an unnecessary, uninformed and highly-partisan criticism of the one billion dollars which was recently approved by the Nigeria Governors Forum (NGF) for the Military to tackle the security challenges facing the country, including Boko Haram, illegal oil bunkering, kidnapping and cattle rustling.

“I said unnecessary and uninformed because everyone knows the role the military is playing in helping to tackle the numerous security crisis facing the states, much less the war against Boko Haram.

“The fact that Boko Haram has been largely degraded does not mean the war is over. As we have said times without number, asymmetric wars like the one against Boko Haram do not end with an armistice.

”It is, therefore, curious that some of those who have criticised the one-billion-dollar approval have hinged their argument on the fact that the Boko Haram has been degraded.

“Perhaps also, the critics do not know that fighting an asymmetric war is costlier than fighting a conventional war. In any case, wars, especially the war against terror, are never fought with budgetary provisions.

“It is common knowledge that the annual budgetary allocation to
the Military is not commensurate with the internal security challenges we face, for which we have had to continuously rely on the Military to assist the Police and the Civil Defence Corps.

“The one billion dollars is not too much to fight our security challenges. Afterral , security of lives and property is at the core
of the existence of any government, and the NGF understands this quite well, going by its action in approving the withdrawal from the ECA”, he said.