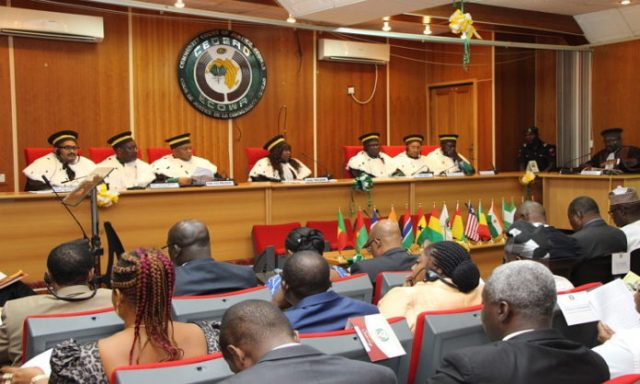 The Federal Government has told the Economic Community of West African States (ECOWAS) Court sitting in Abuja to throw out the fundamental human rights suit filed by the leader of the proscribed Indigenous People of Biafra (IPoB), Nnamdi Kanu.

Kanu was granted bail by the Federal High Court in Abuja.

The Government noted that the IPoB leader has allegedly escaped from his ongoing trial and for this reason, the judgment of the ECOWAS Court on the suit would serve no purpose.

Kanu had filed the suit on March 3, 2016 demanding $800 million as compensation from the federal government for his alleged unlawful arrest in 2015 and continued detention.

Lawyer to the government, Maimuna Shiru, argued that having been granted bail where he is being tried alongside others on charges of treasonable felony, it is unnecessary for the ECOWAS Court to adjudicate on the IPoB leader’s suit.

Also, Thomas Etah, who deposed to an affidavit filed in support of the Nigerian government’s motion, pointed out that the IPoB leader filed his notice of registration before the ECOWAS Court on March 3, 2016, while the plaintiff was granted bail by the Federal High Court on April 25.

Lawyer to Kanu and IPoB, Ifeanyi Ejiofor, had earlier told the ECOWAS Court that he needs to respond to the application by the Federal Government.

According to Ejiofor, the Federal Government deliberately delayed the filing of the motion in order to frustrate the hearing of the case.

Ejiofor’s claims were, however, denied by the government’s lawyer who insisted that the motion was filed early enough.

However, the Presiding Judge of the ECOWAS Court, Hameye Mahalmadane, said the court paper filed by the Federal Government has to be interpreted to the panel members who are all French-speaking.

The Judge, therefore, adjourned the case until February 7 for further hearing.