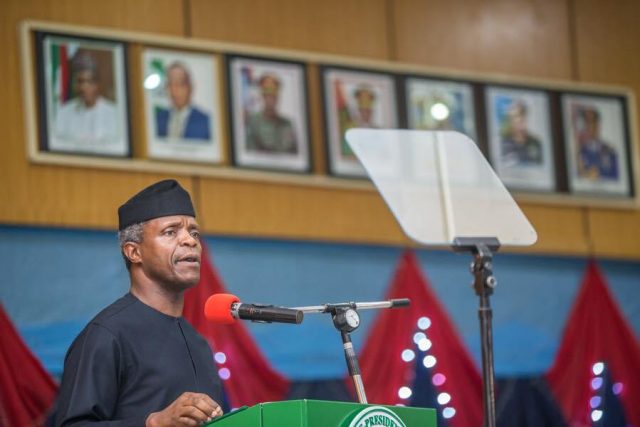 The Vice-President, Yemi Osinbajo, has urged Nigerians to re-examine themselves in the fight against corruption toward developing a positive nation.

Osinbajo spoke during the launch of Corruption Busters by Creative Youth Initiative Against Corruption (CYIAC) a Non-Governmental Organisation (NGO) in Filmhouse IMAX Cinema in Lekki, Lagos State on Saturday night.

They gave the advice at the event organised by the civil society group to commemorate the 2017 International Anti-Corruption day.

“We should re-examine ourselves and move toward changing our perception and our country will one day, overcome this menace known as corruption,”Osinbajo said.

According to him, the president has always stated that, “if we don’t kill corruption, corruption will definitely kill us”, which is why he had given strict instructions on tackling corruption.

He said that no nation could survive with the presence of corruption in her system, adding, “Corruption is one thing that will kill us if we don’t fight it hard indeed.

“We need strong willed men and women who are committed to fighting corruption, though we have had notable committed persons but we need more people who are crusaders and zealous,” he said.