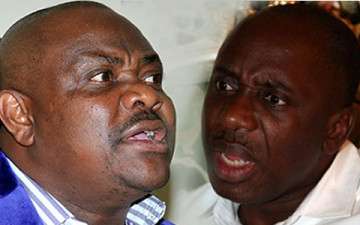 Supporters of Amaechi said he was threatened with guns by an outrider attached to Wike’s convoy.

Eze Chukwuemeka Eze, Spokesman of the All Progressives Congress in the state, claimed the outrider blocked Amaechi’s car, after allowing his (Amaechi) security cars to pass.

Amaechi was said to be on official tour of the state, where he was the governor between 2007 and 2015.

“He was driving his car in the company of Tonye Princewill, who was a witness to the gun  incident.”

The Rivers APC claimed it was an assassination attempt and that it failed because Amaechi was inside a bullet proof car.

“A report made available to us by an associate to Rotimi Amaechi who happened to be in the same car with the Minister, indicates that Wike’s outrider pulled a pistol to assassinate Rotimi Amaechi but missed his target after which Amaechi’s ADC, Debiwari intervened to save the Minister from further assassination attempt”, the APC claimed in a statement by Eze.

Princewill was also quoted to have said:  “I am at a loss if this was not an assassination attempt on the Minister, somebody should explain to me in a clearer sentence why did Wike’s outrider failed to stop the two security vehicles of the Minister which had already crossed but decided for whatever reasons to block the vehicle in which the Minister was driving?

“Why was Amaechi who was behind the steering to navigate his vehicle out of danger accosted by two security men from the Governor’s convoy who had pulled out their pistol and gun to shoot him.

“Why did these men of darkness after realising that the vehicle that the Minister was driving was a Bullet Proof resort to hitting the jeep with the butt of their guns and in the process broke the right driving mirror and attempted to break Amaechi’s windscreen and after which he pulled his pistol to kill Amaechi?

The APC further claimed that after  the failed attempt to kill the Minister, his escort team was  assaulted by the CSO Government House, Promise Wosu and Governor Wike along Trans Amadi road, Port Harcourt with the FSARS operatives on the Minister’s convoy dislodged and forcefully disposed off of one of their AK 47 Rifles.