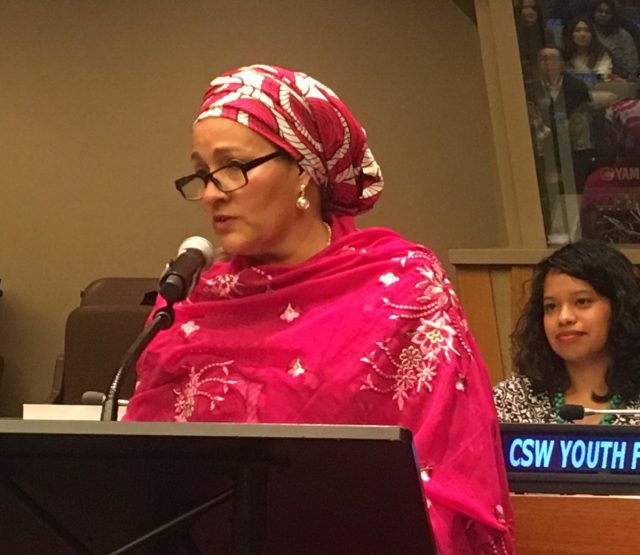 The Minister of State for Environment, Ibrahim Jibril, in a statement denied the allegations being widely circulated in the media against the ex-Minister of Environment.

“The report which contained spurious and unsubstantiated allegations against the former Minister, is a pure misrepresentation of facts, baseless and intended to smear not just Mohammed, but the Nigerian Government.

“The Ministry of Environment wishes to state unequivocally that the ex-Minister is not under any probe whatsoever over any purported wrongdoing whether locally or internationally.

“The ex-Minister acted within the ambit of the law of both the Federal Republic of Nigeria and the protocols of International Environmental conventions while in office between November 2015 and February 2017”.

The Federal Government noted for clarity the processes involved in issuing approvals for Convention on International Trade in Endangered Species in wild Fauna and Flora (CITES).

It said “potential exporters are required to apply to the Ministry” and for “inspection of factories and premises for compliance by wood experts”.

The statement said qualified exporters were issued ‘Letters of Supports’, with ‘Invitation of the Ministry by the exporter for the stuffing of the containers”.

The Ministry stated that all the CITES permits signed by the ex-Minister were done in line with stringent guidance and procedures.

The Ministry further stated that Mohammed, during her tenure as Minister of Environment, carried out far-reaching reforms in the environmental sector.

It cited that of bringing Rosewood from unguided trade of CITES Appendix III to Appendix II, which sanitised the wood industry in Nigeria.

It added that Mohammed “led the Review of Endangered Species Act, Convention on International Trade in Wild Fauna and Flora and duly signed by the President of the Federal Republic of Nigeria, on Dec. 30, 2016.”

The Environmental Investigation Agency (EIA) had earlier claimed that the former Nigerian Minister might have benefited personally from signing thousands of allegedly backdated permits in January 2017 which were allegedly used to clear illegal rosewood exports to China.

EIA further claimed this happened at the time Mohammed was preparing to leave as Nigeria’s Minister of Environment following her UN appointment.

EIA’s report said over 1.4 million illegal rosewood logs from Nigeria worth $300 million were detained at the ports in China in 2016 but were released after the presentation of CITES certificates signed by the ex-minister.