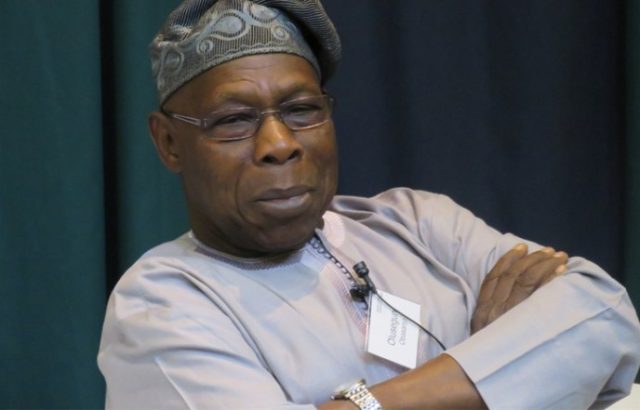 A report by the Economic and Financial Crimes Commission (EFCC) regarding corruption allegations against former President, Olusegun Obasanjo has been released, as Muhammadu Buhari, the president of Nigeria, and a former president, Obasanjo, continue to engage in a war of words.

The fresh clash between the President and one of his predecessors was triggered when Buhari, while receiving a delegation of the Buhari Support Organisation at the Presidential Villa on May 22, indirectly accused Obasanjo of wasting $16 billion on power projects with nothing to show for it.

Obasanjo immediately fired back at the president describing his claims as ignorant and unsubstantiated .

The report, signed by the then EFCC’s Director of Operations, Ibrahim Lamorde, addressed allegations of conspiracy, fraudulent conversion of funds, abuse of office, foreign exchange conversion and money laundering against the former president.

On August 22, 2005, the then Abia governor, Orji Kalu, submitted a petition alleging corrupt practices against Obasanjo to the EFCC.
A second petition was delivered two years later – in November 2007 – by the Coalition Against Corrupt Leaders, a nongovernmental organisation headed by Debo Adeniran, a civil society activist.

The two petitions were consolidated into a single 12-point petition which dealt largely on allegations that Obasanjo’s aides and some Senators connived and took huge sums of money in oil and commissions from Defence contracts.

The petition also alleged that the hostels and sports complex at Obasanjo’s Bells Secondary School and University were constructed by Strabag Construction Company with taxpayers’ money, adding that the total assets value of the university – including ongoing constructions at the time – stood at about ₦40 billion.
It also accused the former president of, as the Petroleum Minister between 1999 and 2006, overseeing “a significant number of fraud” in crude oil sales and accrued commissions in the Ministry of Petroleum Resources.

Other allegations against Obasanjo include the “evidence” that he owned foreign accounts, including a Platinum Credit Card, with which he siphoned money and made purchases abroad; that a “₦6.5 billion proceeds” realised from the appeal fund for the construction of Obasanjo’s Presidential Library were diverted to private use; and that Obasanjo used his presidential powers to approve a licence to Obasanjo Farms, which was in “shambles” while he was in prison, to be sole importer of grant parent stock of chicken.

The petition also included allegations that the Federal Government under Obasanjo exceeded its spending on Ministries, Departments, and Agencies by about ₦133 billion in the 2005 budget and that ₦521 billion was sunk into the now defunct Power Holding Company of Nigeria, and yet, Nigeria was in darkness.

The petitioners further alleged that the former president, while still in office, allegedly diverted official funds to buy about 200 million units of Transcorp shares; used state funds to pursue his ‘Third term’ agenda; and spent about ₦300 billion on construction and maintenance of Nigeria’s roads, yet, “there are still no good roads.”

The EFCC said after receiving the petitions, it sent out an investigating team to visit Bells Secondary School and University, Obasanjo Farms in Ota, and also contacted Strabag Construction Company and officials of the Presidential Library.

Furthermore, according to the Commission, a letter was written to Kalu inviting him to meet with the EFCC investigating team and assist the investigation by supplying evidence to help substantiate the allegations he raised.

“This was followed by series of telephone calls to all his houses both in Nigeria and abroad,” the EFCC report stated.

“A final appeal, through publication of the invitation, was made in newspapers. All these spirited efforts were unacknowledged as Kalu declined repeated invitations.

“The second petitioner, the Chairman of CACOL, Debo Adeniran, appeared in the Commission in Lagos and threw more lights on his write-up.”

In his response to the allegations against him to the EFCC, Obasanjo denied any wrongdoing or involvement in corrupt acts.
He said his Obasanjo Farms was ‘structurally developed’ between 1979 and 1995 and was making a substantial profit before his detention in 1995 caused the farm to suffer a reversal of fortune.

However, by 1998, Obasanjo, according to the report, said the farm was reorganised “towards a new profitability path that spurred its full rehabilitation and expansion.”

On Bells Schools, Obasanjo said all the construction in the school since inception in 1995 had been done through direct labour which was supervised by himself and other officials.

On the issue of crude oil sales and fraud in the Petroleum Ministry, Obasanjo said the Group Managing Director of the Nigerian National Petroleum Corporation, and the Minister of State for Petroleum, were fully responsible and should be contacted for more information.

The former president said he has never owned a Platinum Credit Card or carried one “all his life.”

He also denied having a foreign account anywhere in the world and called on the EFCC to undertake a global search and of any such account was found, it should be frozen and the proceeds be published and subsequently seized.

Concerning the defence contractor, Obasanjo said the ministers of defence were in a better position to provide the details.

The EFCC said based on its own investigation, Bells Schools started off in 1991 with two blocks of burnt bricks hostels, one each for boys and girls, as well as a few number of classrooms.

The report noted that Strabag Construction Company never participated in building the sports complex or hostels at any of Obasanjo’s institutions.

On the Defence contracts, the EFCC said investigators showed that the Ministry awarded contracts ranging from military equipment to other related hardware valued at about ₦6.7 billion, $28 million, €26 million, DM6 million.

“All documents pertaining to importations, bank statements, payments and supplies made by Ministry of Defence were scrutinised and nowhere did it show that any benefit accrued to any individual or group associated or in any way linked to Chief Olusegun Obasanjo,” stated the report.

On the various contracts awarded by the NNPC and the Petroleum Ministry, the investigators also found that contracts valued at over $300 billion and ₦500, awarded to over 20 different companies, were neither directly nor indirectly linked to Obasanjo.

The report’s findings on the Presidential Library showed that its fundraising launch on May 14, 2007, realised ₦3.5 billion and $250,000. Of that sum, ₦1.3 billion was paid to the project contractor, Messrs Gitto Construction Company of Nigeria, as well as the sub-contractors and the project consultants.
On May 26, 1999, three days before he was sworn in as President, Obasanjo entered into a Trust Agreement with Lucky Egede, a lawyer, and Daniel Atsu, whose both addresses were situated at Obasanjo Farms Nigeria Limited, Ota, Ogun State to handle the affairs of the entire farm, according to the report.

The former president’s name was also removed from the list of Directors of the Farms in 1999 when he was going into public office, the report added.

The Trust Agreement with Egede and Atsu were terminated immediately after Obasanjo left office in 2007.

“That investigation revealed that the Obasanjo Farms had steadily grown its balance sheet over the year (sic) through credits obtained from various banks long before he was president,” stated the report.

“That between 1988 and 1998, over ₦41 million was borrowed from First Bank, Union Bank, NAL Merchant Bank, Afribank, and UBA and this was used to grow the Farms while proceeds through profits were reinvested into farms.

“These loans, it was gathered during investigation, had since been repaid.”

“It was also revealed that the shares were used as collaterals and when the president was approached on the matter, he opted to yield back the shares to UBA as it became apparent that this has a strong public concern.

“The decision he took was to return it to UBA where it had been warehoused all along.”

The EFCC further stated that between 1999 and 2007, the PHCN received over ₦273.65 billion and not ₦521 billion and that the appropriation was for its day to day activities, including generation of electricity, transmission, and distribution.

The various contracts awarded in relation to electricity generation, according to the report, amounted to ₦22 billion, $445 million, and €29 million.

“All the documents relating to payments have been checked and scrutinised and there was no reference whatsoever to the former president, his relations, or any front benefitted from the contracts.”

The report further stated it could not establish that Obasanjo diverted public funds for the pursuit of his ‘Third term’ agenda even after the Commission “threw public challenges soliciting for evidence from anti-third term forces in the National Assembly.”

“Going by the evidence from the facts assembled during the course of the investigation, Olusegun Obasanjo could not be directly linked with the allegations,” the report concluded.