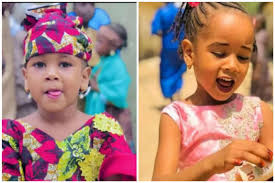 The body of a five-year-old girl, Hanifa Abubakar, who was kidnapped last month, has been discovered in a shallow grave.

It was learnt that the abductors.hsd Kidnapped Hanifa on December 2, 2021, and took the victim to a hideout where they contacted her relatives and demanded a ransom of six million naira.

When they realized that the victim recognized them, they poisoned her to death, butchered her and buried her in a shallow grave.

Police spokesman in the state, SP Abdullahi Haruna Kiyawa, confirmed the incident in a statement issued on Thursday.

According to him, based on the sustained efforts of security agencies, a 30-year-old Abdulmalik Mohammed and a 37-year-old Hashim Isyaku were arrested.

He explained further that the suspects led a combined team of security operatives to where they buried the victim and her body was exhumed and rushed to Mohammed Abdullahi Wase Specialist Hospital Kano where she was examined and confirmed dead by a medical doctor.