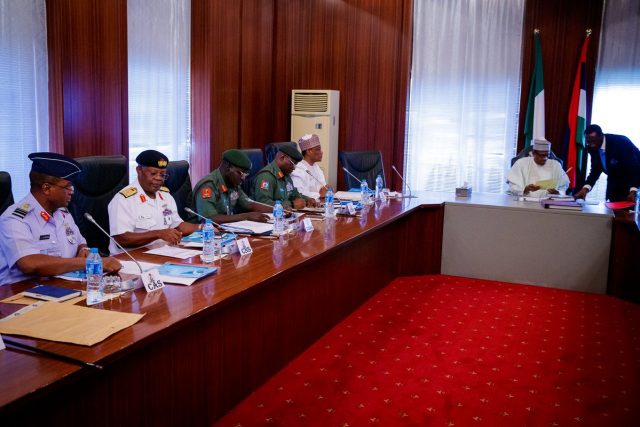 Muhammadu Buhari, the President of Nigeria again on Thursday met with the nation’s Service Chiefs and other heads of Security Agencies.

The brief meeting which was held inside the President’s office at the Presidential Villa, Abuja was the third one this week.

The meeting with Osinbajo was on the invitation of the Senate President, Bukola Saraki, by the Police for questioning over Offa bank robbery that left 33 people dead.

Some of the suspects arrested confessed to being his political thugs.

Buhari also met with the Security Chiefs on Tuesday during which the Minister of Defence, Mansur Dan-Alli suggested the suspension of anti-grazing laws in the states of Ekiti, Benue and Taraba, in order to check the killings said to be perpetrated by herders.

The Thursday meeting started at about 2.30pm and had in attendance all Security Chiefs.

It ended at about 3.17pm. All those who attended the meeting refused to speak with State House correspondents on the agenda.

As of the time of filing this report, the Presidency has yet to issue a press statement on the meeting.