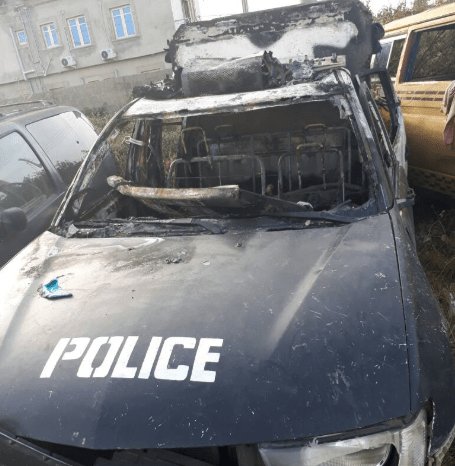 Some angry commercial motorcyclists on Wednesday set ablaze a Police patrol vehicle at Ibeshe in Ikorodu area of Lagos in retaliation to a cyclist’s death allegedly caused by some policemen.

Eyewitnesses told t NAN that the incident occurred at Baale junction in Owode area of Ibeshe in Ikorodu area of Lagos.

NAN gathered that the burnt patrol vehicle was, however, attached to Ipakodo Police Station, another suburb of Lagos.

Sources said that trouble started on Tuesday night when a patrol team from Ibeshe Division allegedly engaged one of the motorcyclists in a hot chase for failure to pay an undisclosed amount.

“Following the refusal of the deceased to pay the money, he was said to have been chased towards Ibeshe road until he fell into a gutter with his motorcycle.

“The Police team immediately ran away with their vehicle, abandoning the fataly injured victim inside the ditch

“Other motorcyclists immediately drove to the scene and moved the victim to a nearby hospital where he died.

“Following his death, his colleagues mobilised themselves on Wednesday and attacked a Police team they sighted before setting the patrol van ablaze.

“The policemen ran for safety in different direction back to the station located on NPA road, Ebute Ipakodo,” witnesses said.

Chike Oti, the Police spokesman in Lagos, confirmed the incident, saying that 63 motorcyclists allegedly involved in the burning of their vehicle have been arrested.

“The CP Lagos has directed that the 63 Okada riders be arrested for burning the police vehicle and that they should be charged to court for arson,” he said.

Oti said that the unfortunate incident happened at a black spot in Ibeshe, Ipakodo area during an encounter between policemen manning the black spot and a commercial motorcyclist plying the route.

“As he (motorcyclist) approached the Police pin down point, the Police team observed that he was carrying a passenger with a big bag placed between him and the rider.

“And so they flagged him down but the motorcyclist increased his speed in order to evade Police scrutiny.

“Sadly, he ended up in a ditch and passed on. Meanwhile his associate with the suspicious bag vanished into the thin air,” he said.

Oti noted that the riders being sympathetic to their late colleague mobilised in their thousands and attempted to burn the Ibeshe Police Post but were resisted.

He said they then moved and found a softer target which was a Police van stationed at a known black spot in Ibeshe and set it ablaze.