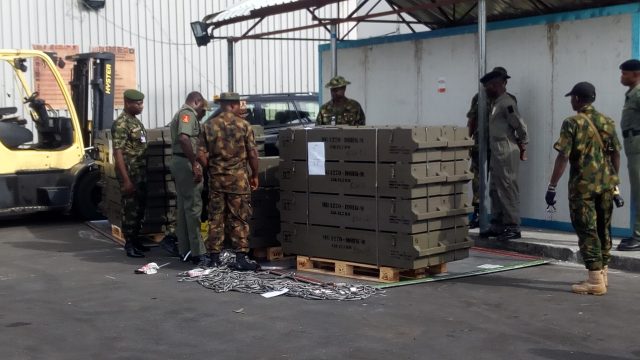 The Nigerian Army on Monday received cache of support arms from the Czech Republic to bolster its counter insurgency operations in the North East, as well as other operations in troubled spots across the country.

The Army had five days ago took delivery of different calibre of ammunition and spare parts, including rockets and projectile to boost the war against terrorism and other forms criminality in the country.

Olufemi Akinjobi, the Chairman of the Arms and Ammunition Reception Committee, told journalists at the Nnamdi Azikiwe International Airport in Abuja that more weaponry were being expected from other countries.

However, Akinjobi declined to name the calibre of arms the committee took delivery of, saying “they are support weapons” for the operation Lafiya Dole and ongoing “Operation Last Hold” Borno North and Lake Chad region.

A few foreign military officers and senior officers of the Nigerian army were seen opening the pallet containing the armsand inspecting them.