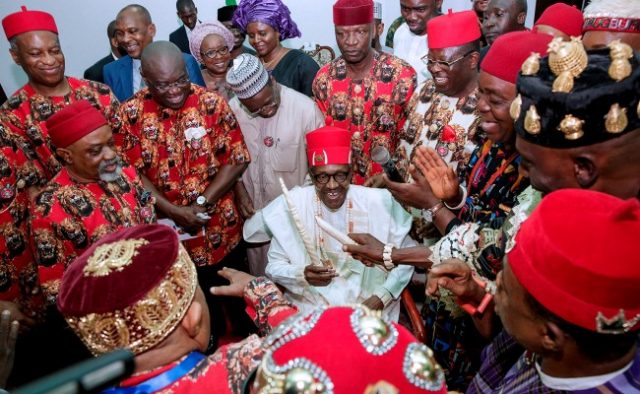 The Presidency has said President Muhammadu Buhari’s visit to Ebonyi and Anambra States has shamed those saying he hates Igbos.

This was made known in an article titled ‘Wise men still come from the East’, by the Special Adviser to the President, Femi Adesina.

Adesina said the assertion that Buhari hates Igbos and Igbos hate him was fiction, pure apocryphal, conjured and concocted by some people to serve narrow political ends.

“In his first shot at the presidency in 2003, who was Buhari’s running mate? Chuba Okadigbo. Where did he come from? Ogbunike, town of the famous cave, in the South East.

​”And in 2007, candidate Buhari looked towards the East again. He picked Edwin Ume-Ezeoke, a former Speaker of the House of Representatives in the Second Republic, as running mate.

“And in 2011, I remember very clearly. Buhari was on the march again, and needed a running mate. Socio-political leadership of the South East forbade any of its sons from being running mate to anyone.​

“​Their candidate, they said, was Goodluck Jonathan, who then was completing the term of Umaru Yar’Adua. So, Buhari looked westward, and picked the cleric, Tunde Bakare. But did he demonstrate any animus towards the East? Not at all.”

​Adesina, who recalled that in 2015, President ​Buhari threw his hat into the ring again said  the East was ​”still in bed with Jonathan, completely besotted, vowing to swim or sink with their brother, Ebele Azikiwe​.
​
”​Buhari looked westward again, picked Yemi Osinbajo, as running mate. A large part of the East was dug in, not minding to play what may be called ‘poor politics’ in the process. When the dust of the elections settled, Jonathan was holding the shorter end of the stick.​”