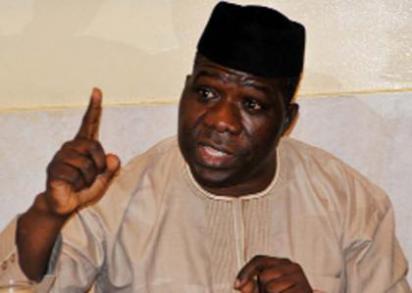 A former member of the House of Representatives, Opeyemi Bamidele , has been flown to the United Kingdom for further treatment .

Punch reports that he was flown in a private jet belonging to a former Lagos Governor and a Chieftain of the All Progressives Congress (APC), Bola Tinubu, on Friday night after receiving treatment at Euracare Multi-Specialists Hospital on Victoria Island, Lagos.

Bamidele and five others were shot at a reception rally organised for the All Progressives Congress candidate for the forthcoming Ekiti State governorship election, Kayode Fayemi, at the party’ s secretariat in Ado Ekiti on June 1.

He was flown to Lagos last Sunday in an air ambulance after doctors at the Ekiti State University Teaching Hospital, Ado Ekiti , extracted two bullets from his abdomen and leg.

according to a source, Bamidele, who served as a Commissioner for Information and Strategy under Tinubu was flown to the UK on the insistence of Chieftain that he be exposed to treatment in line with best global practice .

“He ( Bamidele ) had started cracking jokes at the Ekiti State University Teaching Hospital, Ado Ekiti, where a surgery was performed on him before he was flown to Lagos for further treatment,” the source said.

He also dispelled the rumour that Bamidele was flown abroad because of fears over his health .

“He (Bamidele ) is fully stabilised, so there is no cause for alarm. He only went abroad for a post-surgery management and to get prepared for the task ahead. He actually walked into the plane.”