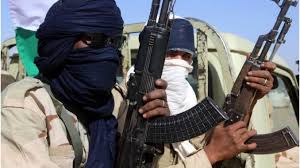 Armed men suspected to be bandits.has Kidnapped the traditional ruler of Bukpe community in Kwali, Abuja, Hassan Shamidozhi and four other persons

It was gathered that the unfortunate incident occurred on Wednesday night when the armed men invaded the palace.

The Head of Information and Protocol at the Kwali Area Council Secretariat, Emmanuel Habila, confirmed the abduction to Channels TV on Thursday.

According to him, the police and operatives of the Department of State Service, DSS are currently on the trail of the kidnappers to ensure the victims are rescued unhurt.

Habila explained that the incident occurred while the monarch was having a rest in the palace.