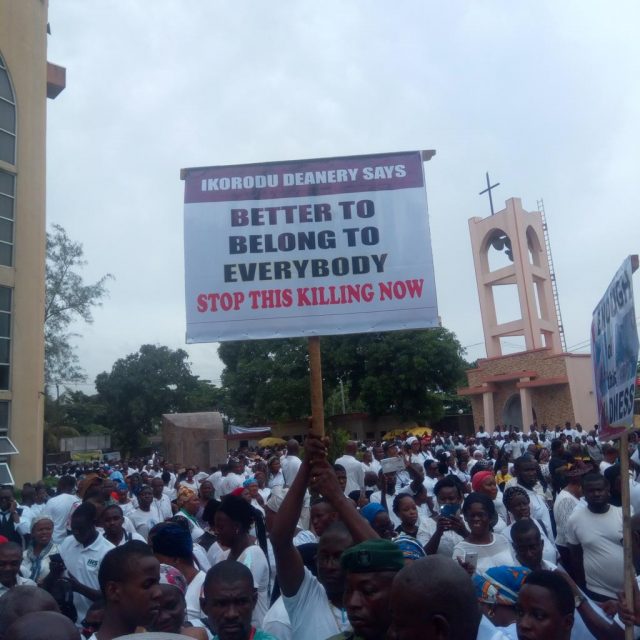 The Catholic Bishop of Jalingo Diocese, Charles Hammawa, on Tuesday called on the Federal Government to protect the sanctity of human lives to calm the growing tension in the country.

Hammawa made the call at a requiem mass held at Our Lady Queen of Peace Cathedral, Jalingo, in solidarity with the burial of the two Catholic Priests, Joseph Gor and Felix Tyoloha as well as 17 other parishioners in Benue State.

The two priests and 17 of their parishioners were murdered during a morning mass at St. Ignatius Catholic Church, Mbalom in Gwer East Local Government Area of Benue State on April 24.

The Bishop called for unanimous condemnation of the killings going in the country which he said had assumed a more dangerous and disturbing dimension.

“These continuous killings of innocent people, while our elected leaders look the other way is an act of betrayal, an act of blasphemy against God (or Allah).

“It’s a blasphemy for our elected people to allow the killings of human beings as if their lives did not matter. The federal government must rise up to protect all citizens without bias, for every human life matter and no life is more important than the other.

“The present government of President Muhammadu Buhari lack legitimacy and sincerity of purpose and people should not support such government that lacks legitimacy.

“If he can no longer protect the lives and property of citizens which is a primary constitutional responsibility, he should step aside.

“By all indications this government is failing and that is why I am calling on the people not to support a failing government if he cannot change his ways,” he said.

Hammawa noted that all lives belong to God and the lives of others should not be seen as being superior to the others.

However, he urged Christians to be peaceful in the face of provocation, but defend themselves where they could.