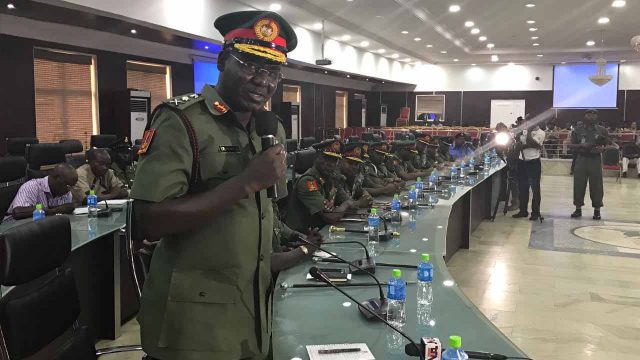 The Chief of Army Staff, Tukur Buratai has charged Field Commanders to remain focused toward containing the traces of insurgency still being recorded.

Buratai made the remark while declaring open a five-day retreat for past field Commanders of the ongoing counter terrorism and counter insurgency operations in the North East.

“I want to state that the counter terrorism operation that is ongoing in the North East is equally being fought or being conducted by our neighbouring countries, Niger, Cameroon and Chad.

“That is why the Multinational Joint Task Force (MNJTF) was established, knowing the volatile nature of that region – the Lake Chad region. So, keep your mind focused, not only on the short term, but equally on the long term containment of the Boko Haram insurgency.

“The Boko Haram may go any moment, but there are other forms of criminality and other criminal activities may spring up within that Lake Chad region.

“So, it is not just a one-off solution that we should expect, but it is going to be a continuous operation, especially within the Multinational Joint Task Force environment,” the Army Chief said.