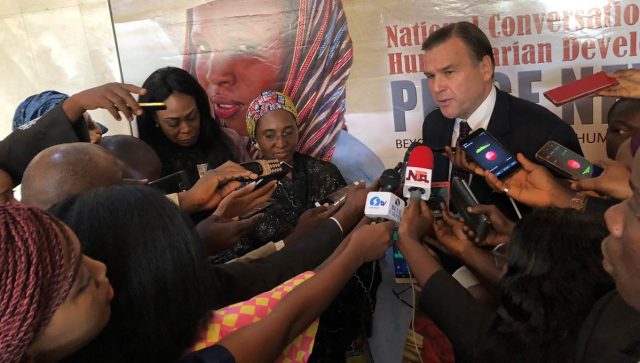 The United States Ambassador to Nigeria, Stuart Symington on Thursday announced an additional $102 million in humanitarian assistance to address the shelter, health and food security needs of populations in the Lake Chad region and those still struggling with the effects of the Boko Haram insurgency in North-East.

A statement from the US mission Information Office in Abuja, stated that the funds for Nigeria represent the vast majority of the U.S. Government’s new $112 million infusion for the Lake Chad region.

Speaking at the ongoing National Conversation on the Humanitarian-Development-Peace Nexus, Symington disclosed that the assistance would be administered primarily through the U.S. Agency for International Development’s offices of Food for Peace and Foreign Disaster Assistance as well as the U.S. State Department’s Bureau for Population, Refugees, and Migration.

“Our hope is that this new investment in humanitarian assistance will combine with the efforts of your government and people to move Nigeria forward on a path to peace and prosperity,” Symington stated.

The Ambassador pointed that today’s announcement will provide life-saving aid to hundreds of thousands of people, including emergency food assistance, nutrition treatment, shelter, health services, safe drinking water, services for survivors of sexual violence, and support to children who have been separated from their families.

As of May 2018, an estimated 2.3 million people in the northeast experienced extreme food insecurity, largely due to widespread insecurity, protracted displacement, depleted assets, and the interruption of agricultural production throughout the region.