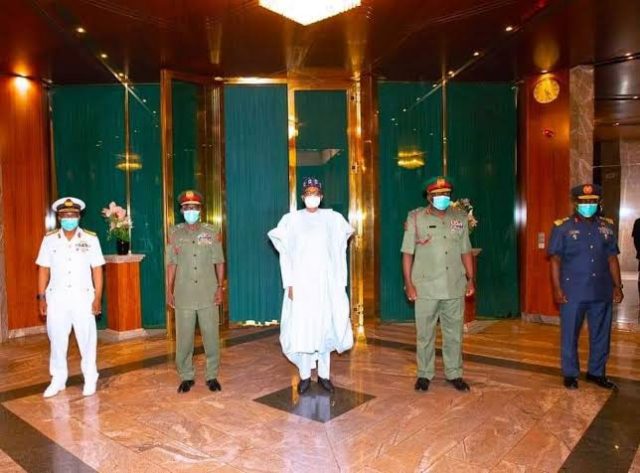 The presidential communication was done via Buhari’s letter which was written on  27th January 2021.

This disclosure was made on Friday by the  Senior Special Assistant to the President on National Assembly Matters (Senate), Senator Babajide Omoworare who made this disclosure on Friday.

The presidential aide said that the action is in line with Section 18 (1) of the Armed Forces Act Cap. A.20 Laws of the Federation of Nigeria.

He dismissed the claim in some quarters that the President has by-passed the National Assembly on the appointments.

“It is on record that this same procedure was adopted when the immediate past Service Chiefs were appointed. Upon announcement of the appointment of the then Service Chiefs – Major General Abayomi Olonisakin (Chief of Defence Staff), Major General Tukur Buratai (Chief of Army Staff), Rear Admiral Ibok-Efe Ibas (Chief of Naval Staff) and Air Vice Marshal Sadique Abubakar (Chief of Air Staff), Mr. President had written the 8th Senate on 14th July 2015 for confirmation. Whilst the correspondence was read on the floor of the Senate on 28th July 2015, consideration and confirmation of the appointments was carried out at the Committee of the Whole on 4th August 2015,” Senator Omoworare stated.