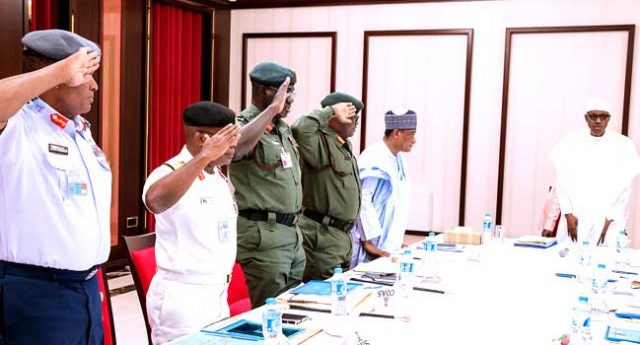 Muhammadu Buhari, the President of Nigeria and the Vice President, Yemi Osinbajo, on Monday held separate meetings with security chiefs at the State House in Abuja.

The President first met with the Security Chiefs and heads of Security Agencies after which the Vice President held a meeting with the Inspector General of Police, Ibrahim Idris; the Director-General of the Department of State Security, Lawal Daura; and the Attorney General of the Federation, Abubakar Malami.

Both meetings were held behind closed doors.

Although the IGP refused to disclose details of the meeting which lasted for over two hours to journalists, it is believed to be in connection with the ongoing case involving the Senate President, Bukola Saraki and the Police.

The Police had on Sunday invited the Senate President for questioning after suspects arrested in connection with the robbery in Offa, Kwara state, allegedly indicted him.

The suspects had claimed that they were political thugs of the Senate President and Kwara Governor, Abdulfatah Ahmed.

The Police through its letter rescinded its decision, telling Saraki to defend himself in writing than coming to the Force Headquarters, asking him to respond in writing to the allegations, within 48 hours.